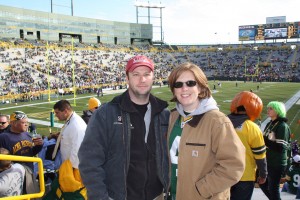 Green Bay, Wisconsin is a wonderfully neat town. It is home to the last truly small town professional sports team. What makes the Packers special is the community that surrounds it and supports it. It is not owned by a George Steinbrenner or Jerry Jones type. The Packers are owned by its community and fans. What made Brett Favre their hero was his down to earth, blue collar, working man’s personality. He brought Green Bay back to the title games it had grown accustom to during the early years.

This weekend the legendary QB returned to play against his old team, this time clad in purple and gold. I was lucky enough to witness the tussle on the tundra. Much was made about his multiple efforts to retire only to return late in the summer. I would describe his behavior as that of a drama queen; however, the Packers organization did choose to trade their favored son. Packer management wanted to move on without number 4 leading the team to a younger quarterback. It was a nasty divorce with lots of crying, some kicking, and lots of media coverage. It was ugly on both sides.

Unlike the ESPN and Fox coverage of the jeering crowds, yesterday I noticed a lot of truly classy people in the stands. As Favre took the field for his pregame warm up there were hundreds standing and clapping. There were signs displayed thanking Brett for many years of good memories. As the boos drowned out the warm greetings there were also T-shirts and signs calling Favre a traitor and even calling him Judas. It was a hostile environment, but I am sure Alabama or Florida State was a little more hostile when he was in college at Southern Miss. The Golden Eagles being lead by Favre commonly upset ranked opponents. College fans in the south are much more vicious than pro football fans. Trust me on this one. The only true difference in a pro fan’s wrath and a college fan’s passion is that alcohol can be sold in pro stadiums (notice I didn’t say “consumed”).

Everyone we met seemed to have something nice to say about the aging diva. One lady we met in our hotel said she slept better on Saturday night just knowing that Brett was in Wisconsin again. Another man remarked as he was pumping gas that he was a die hard Green and Gold man, but he wanted to see Favre do well on Sunday. There were more number 4 jerseys in the stands than any other player, true there were some green and some purple. Heck, there were also a few number 4 Atlanta Falcons jerseys and I saw one Southern Miss jersey as well. Overwhelmingly, people still support him. The gift shop in Lambeau still sells Favre jerseys. One clerk told me they sell more 4s than 12s even after the divorce.

Overall the game was great. The Packers have an up and coming team. Pretty boy Aaron Rodgers will one day take the pack to the playoffs, maybe even bring home the title. Brett Favre can also still play for the love of the game. The Vikings gave the aging player a chance to make one more run to the title! As we left I was sad. The environment that surrounds Lambeau is strictly for the enjoyment of football. The stadium is like a stadium should be, even with the addition of luxury boxes. The memories of Bart Starr and Vince Lombardi can still be felt in this simple but classic structure.

This entry was posted in Adventures and tagged Adventure, Brett Favre, Family. Bookmark the permalink.