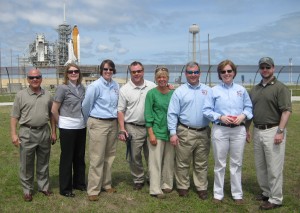 Twenty years ago when Dottie Metcalf-Lindenburger graduated from Space Camp in Huntsville, Alabama she dreamed of one day working for NASA. In 2004, she entered the NASA training program for Astronaut Candidates. Yesterday, she launched into space onboard Discovery. When the crew of STS-131 launched there was nearly twenty Space Camp employees and board members at Kennedy Space Center. It was a field trip of sorts. We all felt so proud of our first Space Camp alumni astronaut we had to make the trip down.

Chris, Kerby, and I left on Friday night at eight o’clock. We felt like we were in college again driving to Florida. We drove through the night and only stopped twice before arriving in Titusville at breakfast time Saturday morning. Our plan was to rest and then go to a few pre-launch receptions to mingle with other space geeks. A shuttle launch is like a spring break trip for geeks. Rather thank going to Panama City, drinking copious amounts of Natty Light, partying until day break, and wearing next to nothing. Space geeks assemble around Kennedy Space Center, drink a respectable about of Jack and Coke, wake up in the middle of the night to see a shuttle launch at day break while wearing business casual.

We connected with space geek and Tennessee Squire Leesa and her friend Julie to venture around the pre-launch celebrations. While at the Hilton Cocoa Beach we bumped into astronaut Stephen Robinson. Hanging out with an astronaut is always fun, but he was talking with three other Space Camp alumni, all of whom are huge supports of space flight. We need more events like this to build the Space Camp alumni base. Meeting these ladies during a pre-launch party when the first Space Camp graduate was prepping for her adventure in space was special to me. The whole trip was special, it was a once in a life time experience.

Sunday morning we toured KSC focusing on the area around launch pad 39A. Discovery was prepped and ready. Our group got to go beyond the tour gates. Our tour guide and astronaut guest urged us to stay in the roped area. I love to venture off from tour groups, but this was one time I wasn’t going to disobey. I was so committed to the rule of staying in the roped off area that when the command came to reload the bus, I reminded our guide that she told us to “stay in the roped off area.” To be 300 yards from the Space Shuttle on the pad is like seeing your favorite baseball player hit a grand slam. Or since the Space Shuttle is so old, it is like seeing Brett Favre pass for the winning touchdown. 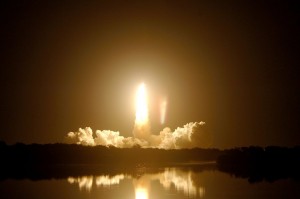 We woke up Monday at midnight. I wasn’t sleepy; I was wired like I had just finished 10 Red Bulls. I was about to see a shuttle launch. And not just any launch, the launch of Space Camp’s first astronaut and with some of my favorite people! It took us about an hour to drive to the Operations Support Building II (OSBII). We entered a big conference room with large projection screens and televisions on the walls. Astronauts, Senators, Congressmen, and members of the President’s Cabinet filed into the room. I was more interested in watching the live telecast of the white room. I heard a collective cheer on Facebook and Twitter from Space Camp graduates around the world when Dottie appeared on camera.

When Charlie Bolden entered the room, Marcia and I made our move for an STS-61C sandwich and to present the NASA Administrator with a Space Camp coin. Hoot Gibson, friend of Space Camp and astronaut extraordinaire, had flown with Charlie Bolden on STS-61C. When I spoke to Hoot on Saturday night, he encouraged me to ask Bolden for a sandwich. An STS-61C sandwich is defined as an embrace from one of the male members of STS-61C with a lady between him and another male. Unfortunately, Hoot was not at the launch to complete the sandwich. I know it might be a stretch, but at that moment I felt like I was a Space Camp Ambassador spreading world peace from our little camp program.

The time came to assemble on the balcony of the OSBII. The countdown clock was still in the nine minute hold. The OSBII is right beside the VAB and just behind the press viewing area. We were three miles from the launch pad. We could see the shuttle’s ET and some of the orbiter. The servicing structure just blocked the shuttle from view. There had been some concern with a fuel cell, fog around the Cape, and the eastern range but everything was clear and the mission was go coming out of the hold. As the clock moved toward launch everyone listened and watch like little kids waiting on Santa. When the shuttle main engines ignited it appeared like New Years sparklers on the pad, there was a flash, but we didn’t hear anything. The SRBs ignited with a bright flash but it wasn’t until the shuttle left the pad that the light from the SRBs flooded the night sky. It was so bright that you wanted to turn away, but I didn’t dare even blink. I was watching the second to last launch of Discovery and the last night launch.

As the shuttle rocketed toward space, we could see the reflection of the exhaust on the water surrounding the pad. When the sound of the shuttle made it to our ears, it roared louder than any sporting event or race car. It shook the whole building, my body, my heart. It was amazing! Tears were welling in my eyes as I flashed back to every shuttle launch I saw on TV and the one I saw a few years back. So much was connected to the launch: Dottie’s connection to Space Camp, the fourth to last launch of the only American manned spacecraft that has flown in my life time, I was their with punkin, my boss and friends, and so on. 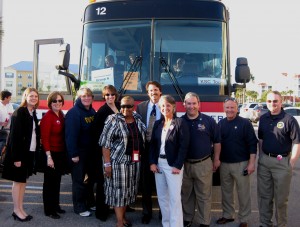 Dreams are important things. If we don’t dream then we won’t have direction. We will amble around this world looking for something to give us happiness. Dottie Metcalf-Lindenburger is a teacher and astronaut. Her mission to the ISS will inspire many to dream. In being part of Space Camp, my mission is similar: to inspire the next generation of dreamers. Our Space Camp field trip to the launch of STS-131 has inspired me more than I could have imagined. It was a magnificent sight with powerful sounds and emotions. I am thankful, lucky, and blessed to work at Space Camp!