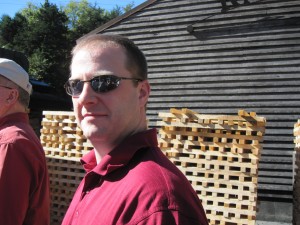 September is an amazing month! On Saturday morning when I opened the door to let Boo out, I discovered fall was here. It was 54 degrees and I was headed to Lynchburg for a tour and barbecue. This makes for an amazing day! Later in the day there would be lots of college football!

The only downside to the whole plan was the in-laws were tagging along on this Jack Daniels trip. Not to worry, just because they were bored and not much fun, I still had a blast. The best story from the day was when Mrs. Key went 10-12 steps out of her way to use the crosswalk on the square in Lynchburg. Lynchburg is a town with one traffic light and lots of pedestrians. Mrs. Key is a very cautious individual who doesn’t even like to use the word “risk.” Don’t get me wrong, it was nice visiting with the Keys, especially since they don’t come around much. It has been three years since they visited us in Huntsville.

Football, it was an amazing day for college football! Ole Miss or University of Mississippi, whatever they want to be called lost to Jacksonville State in overtime. Houston Nutt proclaimed it the toughest loss of his coaching career. Colonel Reb was not in attendance for the game. Why does political correctness even have a place in college football? I would like to think Ole Miss has cursed themselves; which I am fine with. They are killing off an iconic figure in Oxford, Colonel Reb, for Rebel the cutesy Black Bear. I don’t follow Ole Miss, but why would they give up a piece of the history? What are they thinking? It is silly, but I am enjoying ringing my cowbell this morning!

September is filled with wonderful reasons to love this month! Be Ready Camp starts next week and almost 90 kids will be at Aviation Challenge to learn about preparedness. It is a little about learning real life skills. College football is all around and there is lots of excitement. My favorite TV show, Glee, will return to FOX during the week between college football games. After BRC we will have SCI-VIS and more college football. And I am sure; I will go to visit Lynchburg a time or two since it is Jack’s birthday. Lets all be sure to enjoy September, the best month of the calendar year!