This morning we woke up in Rockford, Illinois one time home of the Rockford Peaches of the All-American Girls Professional Baseball League. Growing up, one of my favorite movies was A League of Their Own. This morning we took our time driving up the Wisconsin country side, lots of crops, barns, and livestock. We also stopped at a hunting and sporting goods store to buy warmer clothes, all in preparation for a football game.

The origin of this trip was way back last year. My buddy, Charity and I wanted to make a road trip to a Packers game. Life and the trip changed and Safety was added to the mix. We picked our trip date early in April, just after the schedule was released to the public. I think Brett Favre was drinkin’ beer in Mississippi and filming Wrangler commercials in April. There wasn’t any talk of Brett being a Viking. During the summer ESPN started reporting the possibility of Favre’s return to the NFL. Then one day, in a frenzy, a jet left Hattiesburg, Mississippi and when it landed Brett Favre was a traitor.

Now it is Halloween and I am here with my parents. We have had a great trip and we are anticipating a great game. I am sure it would be more enjoyable to see the Packers beat up on a lesser team. Or see Brett Favre in his younger days. But that is not going to happen on this trip. There is a battle brewing tomorrow and it will not be pretty.

Many articles and blogs have described Favre’s defection to Minnesota as a nasty divorce. There was talk of making the world’s largest waffle to honor Favre’s indecisive nature. Maybe he is dragging his feet as he heads to retirement, but let’s look at the Packers for a moment. They wanted to go in a different direction. Green Bay wanted a divorce as much as, or more than, Brett wanted to play another season. They wanted to chase another younger woman, Aaron Rodgers. No matter what, Brett is better off with a more complete team to finish his career with and Green Bay is building a team for the future. 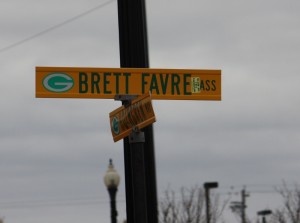 The only thing missing in this whole saga is class! There have been passive aggressive comments made by both sides. I have seen lots of angry fans and nasty comments. But I leave with a photo taken just outside Brett Favre’s restaurant located on Brett Favre Pass. I will let the photo speak for itself. No matter what, this has been a great adventure so far.

This entry was posted in Adventures and tagged Brett Favre, Family, Football, Mississippi. Bookmark the permalink.