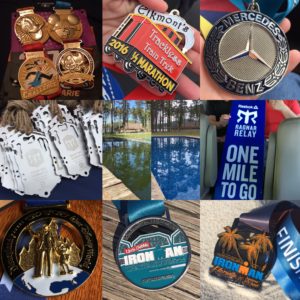 The year 2016 was hard for a lot of people. With the presidential election, social protest and the loss of so many A-list celebrities I don’t think I can say anything new about 2016 being difficult. However, as I review the past twelve months, I see a theme of mental toughness. Beyond my endurance sports, mental toughness has played a huge role in how I attacked and conquered 2016.

As I reflect, 2016 was like an Ironman Triathlon to me. In the first two months of the year, it was an easy swim. I started a new job at a camp, achieved a few certifications and attended a conference. Nothing too taxing at the time. I have been told I can swim all day long. I ran a few races at Disney World… Dopey Challenge, and then a local half marathon where a blood hound ran the whole course.

By the time March arrived, I had discovered that the camp I worked at was in need of major repair. This started the long miles on the bike. A constant churning at work to accomplish renovations and repairs was similar to riding 112 miles in the summer heat. I worked most everyday from March to August. I didn’t get everything completed before camp started. I compare that to not having a great swim to bike transition during a triathlon.

For the most part, I did a good job until June training for my actual Ironman event, IM Chattanooga. Once camp started the number one focus was the campers and their needs. That meant training stopped for me. I was chugging way with focused intensity on the work that needed to be done. Without mental toughness, I wouldn’t have made it through the summer or the events of late July.

While at camp in Guntersville, my mom called to report my nephew had been in a 4-wheeler accident. I scrambled to put things in place to leave camp. I relied on a great support team at camp to make this happen. They would have been my sherpas to continue the Ironman analogy. God is good all of the time, Rhett survived the 4-wheeler accident but he would have to recover from a brain injury. It took three months of hospital and rehabilitation before he could go home. He is good! And in many ways, I think my family is stronger because of the accident.

During Rhett’s recovery, I remembered there was an actual Ironman in September… I should start training again. Training is what I hadn’t been doing since June. It became the priority. No, I wouldn’t be at the top of my game. I hadn’t spent the long hours training during the summer. I would rely on my mental toughness to grit through IM Chatty. I trained in the time I had left but nothing I trained for could prepare me for the heat in Chattanooga during the event.  It was in the high 90’s during the entire day with a heat index over 120F. I needed to stay hydrated and keep my resiliency to cross the finish line.

I had a few more events during the last three months of the year, this would be the marathon of my year long Ironman. I gritted out a 15K, 2/3 of a half ironman, Bourbon Chase, Ironman Florida and a half marathon along with traveling to Iceland, turning 40, work and Christmas vacation. Mentally, I am tired after all of that.

The last day of 2016 brought one last event, a 50K. This would be a great finish line to my year long Ironman mental toughness extravaganza. Oh, I had a sinus infection just to add a level of difficulty to the simple 3 mile-loop course. Don’t worry, I know I can grit this out. I have mental toughness.

I think the only reason, I convinced myself to grit this race out, was because of a book I read. “Living with a SEAL”. In this book, billionaire Jesse Itzler, hires a former Navy SEAL and endurance athlete to live and train with him so he could conquer goals of his own. It is a book devoted to mental toughness and how to train your body not to quit. Looking at how I trained or didn’t train in 2016, I did things kind of backwards. I relied on my grit to get me out of foolish race events. I knew in my head, I could do two Ironman races in 41 days even if my body told me different.

Yes, I am mentally tough. But what if my body was just as tough as my brain. In the SEAL book there is a quote by the SEAL, Jesse calls it the 40% Law. “When you think you’re done, you’re only at 40% of what your body is capable of doing. That’s just the limit we put on ourselves”.  If I complete most everything I do on limited training and my mental strength, what if focused more on training than ever before. I ask what is the goal… gutting things out with mental toughness or bettering myself?

This entry was posted in Year End Blog and tagged Adventure, Ironman, Triathlon. Bookmark the permalink.