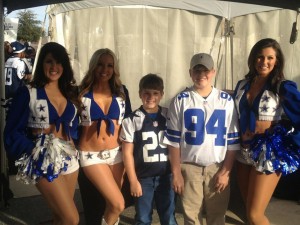 This has been a great year! I spent more time with my wonderful family. I have expanded my circle of friends, strengthened bonds with old friends. This was year I proclaimed, I am never too busy for my family and friends. I look forward to 2013 with fond memories of 2012 in my heart! Here are my top ten adventures of 2012… in no particular order.

Trip to Big D – A two days before Christmas my brother took his sons to a Dallas Cowboys game and I got to tag along. We drove from Mississippi to Tyler, Texas, birthplace of Johnny Football. Ate at the coolest and best Tex-Mex restaurant I have had the pleasure of eating at. Sunday morning we drove to the stadium for the game. The game unfortunately was a loss, but the adventure is the most important thing. The highlight of the trip was arguing with Rhett and Reece about having their photo made with the Dallas Cowboy Cheerleaders. The argument turned out positive, you can see by their smiles!

Camping at DeSoto State Park – In January, Amazon, Snapper, Speedo and I went camping near Mentone, Alabama in DeSoto State Park. It was the coldest weekend of the year. The low temperature was 18 Fahrenheit. We survived the cold temperatures, but we should have brought along a bag chair or two. During this camping trip the four of us made a pact to run the Warrior Dash in Georgia in May. It was apparent after that camping trip, 2012 would be a very different year and it has been.

Animals – Having the greatest dog in the world has definitely been a highlight of the past eight years. He is my most faithful companion. He is never more than a few steps away from me at home. He would follow me to work if I let him. His kind and gentle eyes make all things bad ok. This year we lost George, our giant white rabbit. Also during 2012, we added two rabbits to our petting zoo. These two rabbits gave us a litter of 7 kits. Have the worlds greatest dog and bunny rabbits only make me want a few goats, maybe some chickens and hopefully a pig or two someday. 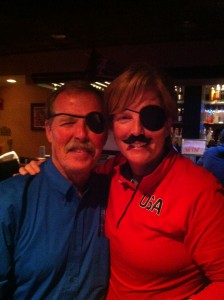 Pirate Night with Hoot – It is always fun when the story includes Hoot Gibson. However, when you cap the night off with eye-patches and mustaches you know you have made an epic memory. Hoot was the rogue Naval Captain who stood toe to toe with the notorious pirate, the Dreaded Pirate Squirrel, who was stealing food from his bird feeder. Captain Gibson fired at the enemy Squirrel with his tactical pellet gun. The squirrel fired back as the pellet ricocheted of the bird feeder. Captain Gibson was doomed to wear an eye-patch. If it is good enough for Hoot… it is good enough for his Space Camp fan club! While at Otter’s, Hoot left the room and Marcia, Snapper and myself donned mustaches and eye-patches to support Hoot in his relentless battle with the Dread Pirate Squirrel.

The Dirt Bike – One day in late August, I visited Mississippi and hung out with my brother and his sons. During a trip to Leland, Mississippi, we purchased a Honda dirt bike. Some people say they want to grow up to be an Astronaut. Some people say they want to win a Super Bowl. I can honestly say, one of my first memories, was to own a motorcycle or dirt bike. I was a stupid, novice, dork the first time I rode the little Honda. However, I loved every moment of the stupidity. I road the little bike at Christmas. I was somewhat  scared of the little bike after hurting my knee, but I learned that the little dirt bike could still be fun and safe. 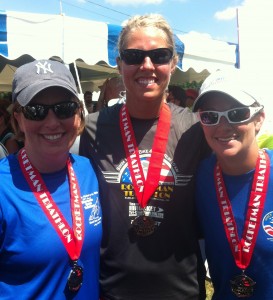 Running – This was the year that Red Bull got in shape. I ran relays, 5Ks, mud races, duathlons and triathlons. It all started when Camp of the Rising Son held at 5K in April of this year. I ran the CRS run in 32:59. I finished 2012 with the Rudolph Run in Huntsville by running a 5K in 28:48. Between the two, I hurt my knee and ran a 200 mile relay with 11 other crazy people called Ragnar. I don’t know how many miles I ran, but I am sure it is the most I have ever run in one year. The goal for 2013 is an Ironman 70.3 or half distance triathlon.

Swimming – I am not Missy Franklin or Michael Phelps, but I love to swim. On January 10th, 2012, I started a masters swim class which changed my world. This would be the spark that would lead me to run triathlons. I ran my first triathlon since college in Decatur, AL in July. It was so much fun. At the end of the summer I swam an olympic distance relay with Amazon and Snapper as my teammates, and oh by the way, we took second as a relay team. Not because of me, but because of my teammates!

Florida – I visited Florida a record four times in 2012. The first time was for a Youth Preparedness Conference in Orlando. I was there to talk about Be Ready Camp; however, the highlight of this trip was Mouse and Marguerite Long at Friday’s near my hotel. Trip two was Tampa for a Yankees Spring Training game where I saw Mariano Rivera pitch two outs in the fifth inning. His season was cut short in Kansas City shagging fly balls. This was my Tampa highlight. In August, I spent a few days with my brother in Destin. Just a few days with my family on the beach was magical! Finally, the Magic Kingdom. After recruiting at ERAU at Daytona Beach, I finished my year with my buddy Mouse near Cinderella’s castle. Enough said… my time in Florida was special!

Peyton Manning Returning to the NFL – Honestly, I had so many emotions last January when it was apparent that my long time boy friend Peyton Manning would not be the starting quarterback of the Indianapolis Colts any longer. He didn’t play in the 2011 season due to a neck injury. There was a part of me that wanted Peyton to retire from the game all together. I didn’t want to see him less than great! I tried thinking of every option for Manning. I imaged Peyton in a Cardinals, Miami, Texans, and Titians jersey and helmet. I was resigned to watching Peyton wherever he ended up and turn my back on Mr. Luck and the Colts. Fortunately, Peyton landed on his feet with his “laser rocket arm” in Denver. He has had an MVP caliber season in his orange and blue. Lets hope that in 2013 we can celebrate something more for number 18!

Ragnar – This was most definitely a highlight of 2012. I ran with my team, I slept with my team, and I even cried with my team. Nothing can really top spending 30 hours in a van with some of your closest friends and heroes. I am sure if we didn’t have Amazon it would have taken our team 48 hours to get from Chattanooga to Nashville. In the process of this whole thing, I learned I was approaching the old lady stage of my life. Check out our video from the adventure. VIDEO LINK

To everyone who has played a part in my life past and present, THANK YOU! I can’t wait to see what 2013 has in store!