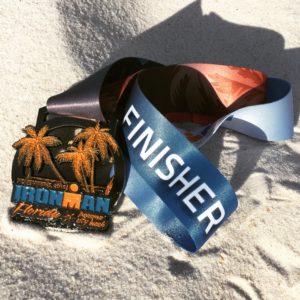 When I signed up for both Ironman Chattanooga & Ironman Florida I had every intention on spending a majority of my time training so I could be at the top of my game for both events. That wasn’t the case, and I have learned a lot about myself because of how the year has been. Only forty-one days separated the two Ironman events. Let’s reflect on IM Florida.

I woke up just a few minutes before my alarm clock at 3:56 AM. I quickly dressed and got ready for the long day ahead of me. Nothing was out of the ordinary for me other than I was doing my first full distance triathlon somewhere other than Chattanooga, TN. This meant a drive to the race location not a walk down the street. No worries, it was just about two miles up the beach. Body marking was fantastic! There was a guy who proudly proclaimed good penmanship. He was correct, he marked me perfectly with fantastic handwriting. Good start to the day!

Only thing I struggled with before the race was just not knowing certain things. No one felt the need to line up at the start line, because it was a rolling start. Everyone just wandered around during the hours before the start. I like structure and this was a little unnerving for me. As the sun started rising, I saw people headed toward the beach. Once I was on the beach, I was much calmer.

The water temperature for the race was 75.7 degrees. This was a wet suit legal race, but I opted out of wearing my wet suit. I feel like I swim better without my wet suit. Yes, there is a buoyancy advantage with a wet suit… but I was in salt water. For me, it was the best thing. I felt good in the swim and at times got a little hot.

The water was calm but the swimmers around me were violent. Pushing, shoving, kicking and elbowing. At one point, I thought it was MMA swimming not triathlon swimming. However, I did enjoy the swim. I saw glowing plankton, a jellyfish, two horseshoe crabs and a whole school of fish. I wonder what the fish think of all the triathletes swimming around them. Do you think they say, “Look, a school of humans”!!!  I am sure the fish are not as excited to see me as I am to see them.

I finished the swim in 1:37:23 which was a little slow for me. I didn’t like the two lap swim. I didn’t like getting out of the water and walking on the beach. I thought there was going to be a run/jog back up the beach to the swim start. NOPE… everyone was single file like little ants marching up be beach. There was just more walking than I wanted. I knew my swim would be longer than Chatty, DUH. However, I wasn’t happy with my time.

Transition was really good. It was a larger transition area to run through than other triathlons, but the changing area was the hotel convention hall! This was very nice compared to the changing tent at Chatty. I put my bike gear on, nutrition set and headed out for 112 magical miles. I say magical because it was only 112 miles in comparison to Chatty’s 116 mile course.

The first few miles were down the coast line where we road between large high rise hotels and other tourist attractions. At this point we had a crosswind, but shortly that would turn into a significant head wind. Wind would be the main storyline for most all of the athletes. Countless cyclist would pass me and comment on the wind. My hope was, if I had a head wind, I had to have a tail wind at some point on the course. I would keep an eye on all the flags along the course waiting for the wind to turn in my favor.

So many great and kindhearted triathletes. You don’t have a great deal of time to chat when cycling, but so many words of encouragement along the way. The volunteers and police officers kept us safe! I felt like the way they controlled traffic and directed us through turns and lane changes was fantastic. There was so many locals who came out to cheer the athletes throughout the day. This was top notch.

The course was pretty much flat, but there were some small up and downs. It was an enjoyable course for the most part. When I was headed back toward T2 and finally had that tailwind, an athlete passed me. He was such a nice guy. He told me I was a strong cyclist and shared how difficult it was for him to get out of T1 because of his extreme sea sickness after the 2.4 mile swim. I was encouraged by his compliment. I also felt good because if he could overcome sea sickness, I could over come the strong winds on the bike.

I rolled into T2 with a bike time of 6:35:10. My mind and gear needed to quickly convert to the 26.2 miles ahead of me. Each time I dismount from an Ironman bike, I thank God for safely getting me through the discipline without mechanical failure or some type of collision.

The first few miles were difficult because my Achilles tendon was very tight and pushed pain all the way into my calf. But as soon as I loosened my lower leg up, the pain was gone. I had everything I needed. My hydration and my nutrition seemed to be dialed in early in the run. I even had my socks just like I liked them. Everything was great, especially the crowd support on the run course. I even enjoyed running through the state park at the far end of the run course loop. Running along the sand dunes reminded me of Big Sur, just not as epic!

Heading back to the transition area and the special needs stop, I did something STUPID! I took the top off of my water bottle to fill it up with ice water. Seemed like a great plan. However, when I discarded the empty cups, I discarded the top to my water bottle. I quickly had to figure out what I would do from mile twelve to the finish line. I emptied the pouch and pockets on my water bottle, drank all of the contents and handed to CK the Sherpa. I discarded the bottle and the negative thoughts about how I could do something so stupid. I told myself, I would just walk the water station and beyond to get the water I needed.

Sadly, I didn’t have the Super Pack there to run with on my second loop. I ran the majority of the run all alone. It was tough, but I did make friends with a runner wearing an University of Alabama jersey. He and I chatted about the LSU / Alabama game that was low scoring and nerve racking. Our favorite aid station, had a football score board and a platoon of Young Marines. “Ma’am here is your water ma’am”! “Thank you, ma’am for allowing me to serve you ma’am”. These were just a couple of examples of the chatter I heard as I ran through the station. It was amazing. Little did they know at one point in time, I decamped over a dozen Young Marines at Aviation Challenge.

The second loop was very dark. I wished I had run with a head lamp. Running through the state park was extra dark and the pavement was uneven. With each step, the finish line was closer. The crowd at the finish line was large and very loud. Crossing the finish line with a marathon time of 5:36:55 was a little emotional, especially since this was my second Ironman in 6 weeks. I was very surprised to see one of the Super Pack at the finish line volunteering as a catcher. Kelsey was was there and recognized me. Not too shocking, I did have the exact same gear on in Florida as I did in Chattanooga. I gave her a sweaty hug and then tried to find my people.

I was proud of my 14:01:56 time. Ironman is emotional and bigger than just one person. After finishing, I joined CK and my Space Camp friend Mare! She drove over from Destin to cheer for me and hang out with CK. It was humbling to know that someone I only kept up with on Facebook would be there for me at the finish line. But then again, so many people were there with me at the finish line. There were people watching the live coverage, following on social media posts or checking my location on the worthless Beacon application. No matter what, long distance triathlon is a team sport. My team is made of my Father in heaven, my friends & family encouraging me and the red head who is swimming with jelly fish, peddling her bicycle and running like crazy through the night.

This entry was posted in Races/Events and tagged Adventure, Blog, Ironman, Triathlon. Bookmark the permalink.