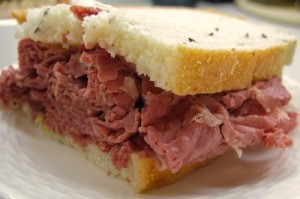 A few months back the Rocket City Grill here at the U.S. Space & Rocket Center changed their menu to include some yummy sandwiches.  The sandwiches were named after a few early American astronaut heroes and all were original Mercury Seven astronauts.  The glaring absence to the list of sandwich was a corned beef sandwich.  On Gemini 3 Gus Grissom and John Young smuggled a corned beef sandwich in to their capsule with help from Wally Schirra.  This was the first U.S. sandwich to travel into space and it was not honored in the naming of The Grissom, which I might add is very tasty.

The Grissom is a ham and swiss on a toasted waffle with powdered sugar served with a side of raspberry syrup.  This is a yummy sandwich but doesn’t have anything to do with space flight.  I stood in shock feeling that something was not right in the space time continuum!  We need a corned beef sandwich!  Since Grissom was already honored with a sandwich I feel like John Young should be honored in the naming of the Rocket City Grill’s corned beef sandwich.  I know what you are thinking; John Young was not a Mercury Seven astronaut!  But for the love of Max Peck, we need to honor the corned beef sandwich’s sacrifice in low earth orbit by giving it a place on the menu of the Rocket City Grill.

Therefore, I have started a movement to put the corned beef sandwich on the menu at the Rocket City Grill as the Young Sandwich!  I have started a Facebook group “We Want the Young Sandwich” to help bring this injustice to the hearts and minds of the American people.  True, NASA was not happy with its mischievous astronauts.  And yes, Gus Grissom became ill upon re-entry and vomited in the spacecraft.  But this story is a part of our history.  The U.S. Space & Rocket Center is a beacon of light in a dark world. This place teaches generations about the early days of space.  It is our duty to have a corned beef sandwich and to teach about this heroic feat of sandwich goodness!

Please stand with me in this sandwich protest!  Join the movement.  Tell your friends about this injustice and ask them to join us on Facebook.  Email your space geek friends, mothers, daughters, and any lover of corned beef.  I plan to organize a “Occupy the Rocket City Grill” rally at some point in the future.  I really hope it doesn’t come to that; however I will stand firm in my belief that we should have a John Young Sandwich!  Thank you for your time and God Speed Corned Beef!