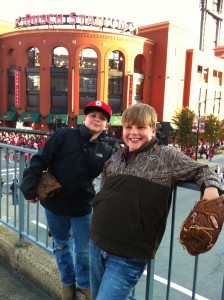 I saw my first Major League Baseball game in Riverfront Stadium when I was 18 months old and saw Pete Rose play as a Philadelphia Philly. My mom tells me that I watched the game more attentively than some grown-ups. Growing up family vacations often included an MLB game along the way. As a youngster we visited Wrigley Field, old Comiskey, Busch Memorial, the Astrodome, and Arlington Stadium. Only one of those still stands today. As an adult, I drove 14 hours on the second to last weekend of the 2008 season to watch a game in old Yankee Stadium. I have seen Cy Young winners, MLB MVPs, Hall of Fame players. However, nothing topped the ball game I saw on Friday night.

Early friday morning my brother text me “Want to meet me in St. Louis?” On Thursday night with a miraculous victory the St. Louis Cardinals  forced a game seven in the World Series agains the Texas Rangers. St. Louis was just seven hours away from my home town. My brother has two baseball loving sons. There hadn’t been a World Series game seven since 2002. I am a serious baseball fan who had traveled longer to see a less important ball game. All things considered, how could I not meet my brother and go to St. Louis.

I didn’t have a tooth brush, a change of clothes or my favorite Cardinals t-shirt but I left work just before nine o’clock friday morning drove to Memphis, Tennessee to drive to St. Louis with Walt and his sons, Rhett and Reece. Snapper even joined the crew heading to the game. By the end of the trip Rhett and Reece wanted to trade me in for Snapper as their aunt.

We arrived in St. Louis just before 4:30 on Friday afternoon. The streets were crowed with cars and fans headed to the game. We walked around just a little bit before the gates opened. The best thing about visiting a ball park is walking up the concourse ramp and seeing the green of the field for the first time. Seeing the World Series logo painted on the field game me goose bumps. Busch Stadium is one of the best ball parks to watch baseball in the MLB. The whole city of St. Louis is dedicated to the Cardinals organization. We were there… Game 7 of the World Series… a Champion would be crowned at the end of the night and we were there to see it! 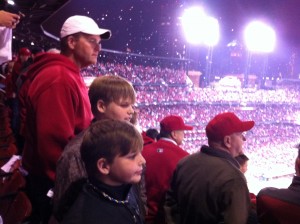 We watched the game from the upper deck along the first baseline. These were not bad seats. We ate hotdogs, pretzels, and I had a Sprite along with a few Anheuser-Busch products. We all had St. Louis ball caps on… wait Rhett had on a Texas Ranger cap.  The images of seeing the players take the baseball diamond on defense and the hits produced throughout the game will be memories that will never leave my head.

As the ninth inning started Reece was standing on the stadium seat peering around the head of the fans in front. The last out got even closer. I thought with a four run lead the Cardinals would pull this game out, but after Texas lost their lead the night before five different times, no one would prematurely celebrate victory. The last batter drove the ball into deep left field everything froze for a second as Allen Craig who hit a home run earlier in the game positioned himself under the ball. As he caught the ball the stadium erupted, confetti flew everywhere and the players pilled on top of one another as fire works blasted beyond the out field stands.

Simply being a baseball fan watching the game gave me joy. I have always wanted to go to a World Series. I think every fan does. However, after family vacations to St. Louis and watching the incredible comeback of the Cardinal which started in early September this night will not soon maybe never be topped by another sporting event. Thank you Walt, Rhett, Reece, and Snapper for game seven! Thank you St. Louis for being a great baseball town!