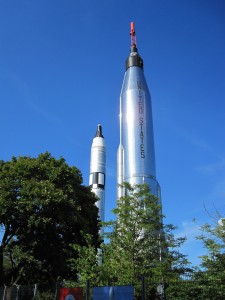 Growing up, my parents made sure we were exposed to the world beyond Carroll County, Mississippi. It was very important for us to be interested in culture, science, politics, art, and other things of the sort. While here in New York I am reminded of their efforts. However, I am here to say I have limited interests. I am interested in baseball, space/flight, and climbing tall things.

In the sea of humanity that is New York City, I seem to be drawn to the same everyday things that I am at home. Chris and I took the train to Queens for a Mets game on Saturday. It was amazing how when we got off the train we managed to find two rockets at the New York Hall of Science. We didn’t even know they existed and we were drawn to them like a moths to a flame. We walked like a mile out of our way to see what these Gemini-Titan and Mercury-Atlas were doing in Flushing Meadows.

On Sunday, we visited the USS Intrepid. Yes, you are thinking that it is a Navy vessel, I am branching out. Nope, the USS Intrepid is a sea, air, and space museum. They had some fantastically awesome aircraft. My favorite thing on board was an exhibit called 27 Seconds, dedicated to the Apollo 1 astronauts. It gave an outline of what happened the day Grissom, Chaffee, and White were killed in a capsule fire during the plugs out test. At the end of the exhibit there was a long numbered line, 1 – 27. From the time the fire started until the astronaut lives were claimed by the fire it was only 27 seconds.  As the seconds ticked away on the number, I tried to read the events of the accident, but the 27 seconds flew by.

Baseball, we are going to visit the new Yankee Stadium today. We went to a Mets game on Saturday. That is surely something my parents succeeded in teaching me about, baseball. We went on many summer vacations that included ballgames. Our first ballgame as a family was in Cincinnati to see Johnny Bench play the Phillies. That year the Phillies had picked up a guy called Pete Rose. I was four and more into the game than the grown ups. I think I have loved baseball since! 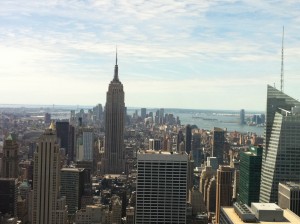 So far, my favorite activity this vacation has been the Top of the Rock, the observation deck at Rockefeller Plaza. I was amazed! At Rockefeller you get a great view of the Empire State Building and Central Park. I didn’t have my camera with me to snap hundreds of photos, so I just soaked it all in. Looking to the south, I thought wow there is seemingly a hole in the sky line, which we all know there is something missing. Especially with the recent political news of a mosque being built at Ground Zero, it is like the whole thing was just erased. My eyes drifted to the New Jersey shoreline to see the Statue of Liberty. She is still standing, and I am sure what is good will prevail in the end.

Chris and I are making memories while we are here in New York. I could have stood at the top of Rockefeller Plaza for hours. It was amazing! We ran into a kid at M&M World near Times Square. He was running from candy bin to toy bin begging his parents to buy him stuff. He proudly proclaimed, “I want MEMORIES!” I think the young chap had it mixed up. Memories are the things you don’t have to pay for in New York City. What he was begging for was souvenirs. Just like the souvenirs I brought home from my childhood vacations, his souvenirs will be gone sooner than the memories of him running through M&M World like a banshee! One of my most cherished baseball memories is when the whole family, including Will went to a baseball game at Busch Stadium in St. Louis.

Thanks mom and dad for creating in me an adventurous spirit. However, I am sorry I have limited interests.