Somewhere in the Bluegrass State 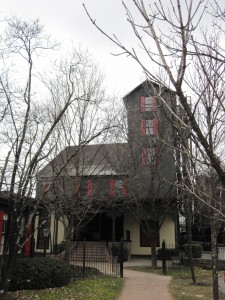 Today we stopped by Enterprise to rent our SUV which looks a lot like a mini-van. I didn’t want to drive a mini-van because mini-van drivers are the worst drivers! So I let Divot drive and I watched movies in the backseat and played on my iPhone. Everything was going well until Divot discovered he had made a wrong turn somewhere around Elizabethtown, Kentucky. We meandered through the country looking for the main road for what seemed like 18.7 miles. Then we started seeing these great big warehouses. They were brown in color and looking to be five or six stories high.

Divot and I arrived in Indianapolis just before six o’clock. We made our way past Lucas Oil Stadium. So for I haven’t seen Peyton, but that doesn’t mean I won’t finally bump into my boyfriend of thirteen years. We have had a long day of driving so it may be better for us to get our rest before we visit with Peyton.

Eventually we discovered a factory or industry of some kind. All the buildings were brown with bright red shutters. The place was a distillery called Maker’s Mark. Go figure! We unexpectedly found a distillery which is a part of the Kentucky Bourbon Trail. I am glad I had been sleeping in the backseat, because now I had enough energy to go on a tour of the building and grounds of Maker’s Mark.

Divot and I really know our rum drinks. We both like Bahama-Mama’s or anything served with an umbrella; so we needed to learn about Bourbon! At the end of our tour, we were offered a sample of Bourbon. Being lovers of coconut rum we declined the offer! Maybe next time we will try, call us finicky!

After getting lost we finally made our way to Indianapolis. We had dinner at Shapiro’s Delicatessen and Cafeteria. It is a traditional Jewish deli that I have frequented before when visiting my Aunt Phy-Phy. Divot and I will be staying in Indianapolis with her and visiting Indiana University and Purdue University to recruit new Space Camp and Aviation Challenge staff. Tomorrow will be our drive to IU, we may have snow!