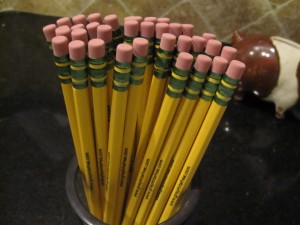 This is the Dixon Ticonderoga, no. 2 pencil, the best and most recognizable pencil in the world! Made by the Joseph Dixon Crucible Company in 1913 and named for the historical military post during the American Revolution, Fort Ticonderoga. Over a half billion of my favorite pencils are produced each year, this blog will tell you a little bit about the inventor Joseph Dixon, the man who started JDCC, the heritage of the Dixon company, and what makes a no. 2 pencil so special.

Joseph Dixon was born in 1799 in Massachusetts; he was the son and grandson of naval captains. As a boy, Dixon was intrigued with fireworks and rockets. He tried making improvements to his father’s ships. As a young inventor he made innovations to the camera, steam engine, and patented a method of printing money to prevent counterfeiting. He started working with graphite refining and became fully dedicated to making the best pencils in the world. He is associated with some the great American inventors like Robert Fulton, Samuel Morse, and Alexander Graham Bell. Dixon would realize his dream and produce the first wood and graphite pencil in the United States.

The Joseph Dixon Crucible Company (JDCC) would make improvements in graphite products such as stove polish, and additives in lubricants and paints, but it would see the most success in the their production of pencils. During the American Civil war the demand for a portable writing instrument led to the mass production of the Dixon brand of pencils. By 1872 the Dixon company was the largest producer of graphite products in the world and making over 86,000 pencils each day. During the late 1800s JDCC would have a factory in New Jersey, cedar mills in Florida, graphite mines in the U.S. and importing graphite from Madagascar.

In 1913, the Joseph Dixon Crucible Company would introduce their marquee product, the Dixon Ticonderoga no. 2 pencil. It was the first pencil designed solely for educational use. The Dixon company would use images of Ethan Allen and the Green Mountain Boys in their advertising. This imagery would link a great American product with the great American spirit. Marketing was very important to Dixon company. In 1929, Dixon would be the first company to obtain a license from Disney to use images of Mickey Mouse and other cartoon characters on the pencils and products. Through several mergers JDCC would become the leading manufacture of school products in the world. In 1983 after a merger with Bryn Mawr Corporation the company would change its name to the Dixon Ticonderoga Company, in honor of their leading product line.

So why is a no. 2 pencil so special? A pencil’s writing core is made from graphite and clay. The more graphite in a pencil core, the softer the grade and darker the markings will be. The more clay in a pencil core, the harder the grade and lighter the markings will be. In the United States we use a number to indicate the degree of hardness or softness of the pencil, for example the no. 2 pencil is a soft/hard black. It is soft enough to make writing easy but the marking is still dark. Everyone knows that no. 2 pencils are used for standardized testing. The markings of a no. 2 pencil are dark enough for the computer sensors to read the scoring sheets and hard enough keep its point for an extended time. While known for their no. 2 pencils, Dixon Ticonderoga also produces pencils in four additional degrees of hardness.

Joseph Dixon was hoping to make the best pencil of its kind, and in my humble opinion the Dixon Ticonderoga no. 2 pencil is the best. I use the Dixon Ticonderoga each and every day. I have hundreds of different shapes and colors of the best pencil in the world. I use them so much that most of the time you will find me with one or two pencils behind my ear/ears. And each day, I hope to live my life in the same fashion as Joseph Dixon made his pencils… The best of its kind!

This entry was posted in Pencils and tagged Dixon Ticonderoga. Bookmark the permalink.