Most people know that I am an adventurous red head. However, I haven’t been as outgoing as I would like in recent history.  I did spend a few years in the wild world of retail working at the Barn, better know to many as Pottery Barn.  Then a stint as a tour guide at Jack Daniel’s Visitor Center in Lynchburg, Tennessee. I gave up my part time jobs to spend more time outdoors. In other words, my time has not been spent with Cameron Drape or chilling not the couch, thus causing my blog to suffer. 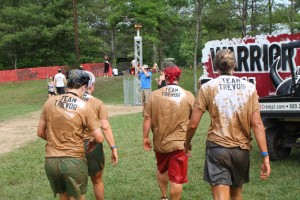 I am sure you may be wondering what I have been doing in the meantime.  The answer to that question is… A LOT!  Last August, my mom saw a picture of me at a wedding on Facebook. She commented to me on the phone that I had gained weight.  What I heard was, “Ruth Marie, you are fat”.  And she was correct, I had gained too much weight and needed more physical activity than giving tours at Jack Daniel’s.  The new year rolled around and I joined the YMCA to start swimming. Shortly there after while on a camping trip I committed to running the Warrior Dash in Mountain City, Georgia in May with my three friends, Snapper, Speedo and Amazon.  If you are not familiar with Warrior Dash, it is a run with obstacles and lots of mud and some flames. To get ready for Warrior Dash, I ran my very first 5K in April at Camp of the Rising Son in French Camp, Mississippi.

After running about three or four races, I was hooked.  I wanted to run more however, I am an Oliver. Olivers are not known for their lightning fast speed or gazelle like agility.  I continued to swim and run no matter the speed.  At some point after Warrior Dash Snapper, my training buddy, and I decided to run a triathlon. To make this goal a reality we would need to start bike training.  At this point is when the fun really started.  My first bike race of any type was Muddy Buddy in Nashville, Tennessee. Muddy Buddy is a relay where I started riding my mountain bike and Snapper started running.  We would switch at an obstacle, I would run and she would bike. Needless to say, this event was super fun!

The next race is the big one, my first triathlon.  Saturday, Snapper and I, with a few hundred other people, swim, bike and run the Wet Dog Triathlon in Decatur, Alabama.  Snapper’s main motivation is the tri sticker she will place on the back glass of her Subaru.  My motivation is the adventure behind it all. Meeting new people, doing new things and losing some of the fat my mom noticed last year.  I am a little nervous but I have had some really great people help me along the way.  I think this is what life is all about: trying new things, sharing life’s lessons and being daring enough to try anything once, even green beans or deviled eggs.