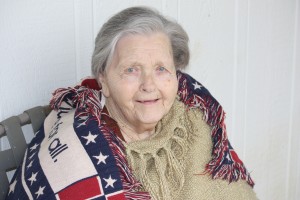 Grandparents are priceless! They are the people who spoil you when you are already rotten. One of the coolest things about grandparents is that you have two sets of them. Grandparents teach how to bake cookies, make Kool-Aid, and instant grits. My grandmother, Pom Pom, passed away last night. She was my father’s mother and my final grandparent.

Pom Pom lived just down the hill from my home. We could walk there in just a few minutes. I always walked with my German Sheppard Maggie or one of the Dobermans. I remember crazy things about walking down to Pom Pom’s house. Once I found a tick in my ear. My mother knew I had to have gotten the tick from walking thought the tall grass to Pom Pom’s house. One Sunday afternoon, Will and I were walking to her house, and Walter was riding on the three-wheeler. Will got excited and ran after Walt. It didn’t end very pretty but I have a lasting image in my head of Will telling me and Walt to hush up and stop crying after Walt hit him with the three-wheeler.

I remember watching Scooby Doo and the Andy Griffith Show. At some point in the 80s there was a United States Marine Corps Colonel on every afternoon for days. His name was Oliver North. I don’t know why I remember that, but I do and I only remember it at Pom Pom’s house. While watching copious amounts of television, she would let my brothers and me do pretty much whatever we wanted to do. We would make kamikazes with Kool-Aid and soda. We really just made large messes. Pom Pom had a red apple cookie jar which she kept stocked with butter chocolate chip cookies, the kind that had a hole in the middle and looking similar to a flower. We would stack these cookies on our pinky fingers and eat them like cookie kabobs.

Pom Pom was always around to take care of people. She was a constant spirit in our church. As long as there was fuel in her tan Nova, she was at church. She visited her little old lady friends on a regular basis. If she couldn’t get out visiting she would call. Our church really had a great foundation of strong women… old women.

Her faith was strong, just as strong as her will. Before I was even a thought in my parents mind, she worked in a shirt factory and kept the dairy farm going. She made sure everyone had what they needed. Some of my first memories of her were working in the garden. That lady could work hard. She had an iron will. In 2005, she had a major surgery to remove an abscessed colon. She was resigned to dying then. She was at peace with it and knew where she was headed. The morning of her surgery we visited and I read to her from Romans and Psalms. We all had wrestled with the fact she may die during the surgery. She woke up in the recovery room madder than a rooster with his tail on fire.

I guess when you hope to wake up face to face with the Lord and all the loved ones who’ve passed away before you; a nurse taking your blood pressure is a disparaging sight. I didn’t know my grandmother could say words like that. She was pissed. Well last night just before 11 o’clock she got what she had hoped for five years ago. This afternoon, she is chatting with all the little old ladies. Will has hugged her neck and welcomed her home. She is with all her loved ones that have gone before her and she isn’t pissed off anymore!

This entry was posted in Mississippi and tagged Family, Farm, Mississippi, Pom Pom. Bookmark the permalink.