I grew up in Mississippi as the daughter of a Mississippi State graduate in Ag-Econ! Unfortunately and joyfully that meant I was inevitably a Bulldog fan. Mississippi State University is a great school with wonderful people but they don’t have a winning football tradition. To date, MSU is 486-528-39 all time. Not a record you can be proud of! But I am! I am proud to be a maroon clad, cowbell ringing Bulldog fan! I am a fan even though I went to school at Delta State University in Cleveland, Miss (Being a Fighting Okra is another blog all unto itself).

See, I have a theory. The reason why Mississippi State isn’t an SEC power house is we don’t have a notable chant. Heck, I consider it a blessing we are even in the SEC. In the conference where you hear War Eagle, Roll Tide, and Hotty Totty, Go State just doesn’t stack up. The only thing wimpier is Go Dores! And don’t forget the annoying ones like the Gator Chomp and Hog Calling, Sooie! See Go State could represent any state university.

It is always fun walking with an Auburn fan or an Alabama fan through some foreign land. Without a doubt there will be someone to cry out War Eagle or Roll Tide. It is fun! I once witnessed a prideful war of words while on a double-decker bus in London when I heard cheers between a few Alabama fans and my Ole Miss friends. Screams of Hotty Totty and “fight on, fight on” from the Alabama fight song filled the air around Trafalgar Square. I was standing motionless looking for my cowbell. That is our come back. Just ring a big ass bell until everyone’s ears are bleeding. If you can’t beat them, deafen them!

Two years ago my hubby went to Starkville for an Egg Bowl with me, my brother, and his kids. It was a chilly late November afternoon. We tailgated with my cousin in front of the dairy building. Chris, being an alumnus of the UAT-University of Alabama Tuscaloosa (I say that just to get under his skin), didn’t know the joy of tailgating near the Junction at MSU. We went to the book store and purchased him some maroon clothes. There is a big difference between crimson and maroon, like 90 miles. I took my cow bell and off to the stands we went. I think Chris said that he wouldn’t ring that “damn bell!” 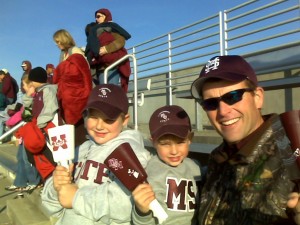 Late in the game State trailed Ole Miss. There was an obnoxious Rebel fan waving his keys and telling us all to go to the parking lot it was over. State mounted a come back and my husband looked to me and asked, “Can I ring the bell?” We took turns ringing the bell as State climbed out of a seventeen point hole! My nephews, Rhett and Reece, rang their bells hard too. It is really fun watching a 30 pound kid ring a cow bell. The cow bell owned him. As State kicked a winning field goal we all rang our cowbells in the Rebel fan’s ear until our hands hurt. It was a glorious day. A day that makes you root a little bit harder for the Dawgs!

So we don’t have a great chant or a grand tradition of winning. We will cheer to the bitter end. We may not be on TV every Saturday or compete for the SEC title each season but when we bleed, we bleed maroon and white. At the end of the day, SEC football is great from the top down. Mississippi State doesn’t have a Tim Tebow or a dead Bear. But the future can hold anything. And as long as we believe in our Bulldogs while we ring our bells anything can happen. Go State!!

This entry was posted in Mississippi and tagged Cow Bells, Family, Football, MSU. Bookmark the permalink.