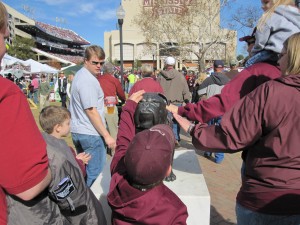 Two years ago Chris and I joined my brother and his boys in the upper deck of Davis Wade Stadium to watch Mississippi State play Ole Miss, the in-state rivalry known as the Egg Bowl. State trailed late in the game until mounting a fourth quarter comeback. This was the point where my husband, the Alabama alumni, started his cowbell ringing career. There was a loud mouth Rebel fan in front of us during that game. He made our lives miserable the whole time State trailed; however, we had our sweet and noisy revenge when state took the lead and the golden egg home!

I am sure if you are not a Bulldog fan you probably will never like the sound of cowbells. But to a kid who grew up going to State games it is sweet music. Chris learned two years ago how much fun it is to ring that bell! Two years ago we had fewer cowbells than people in our group. We were forced to share. Unlike then, this year we came to the game packing a whole lot of bell! Lucy had a small pink cowbell, Chris had a houndstooth cowbell, Walt had an extra-large cowbell, and the boys and I had our cowbells from two years ago. The great thing about today was we had a lot to cheer about!

We started our game day off with some tailgating at the cheese store on campus. There was almost enough family at the game today to have our annual gathering and pass out Christmas presents. My mom had two of her four sisters present. There were five out of six cousins and their spouses. Finally, we had what all good family reunions have, a whole lot of food. Tailgating has evolved into an overgrown potluck social extravaganza. There is not a lot of tail in tailgating anymore; our truck was parked almost a mile away. The boys played a little football, while everyone was shared stories and caught up.

My mom’s family is mostly State people and my daddy is alumni of the cow college. I didn’t go to school there, but my brother did. We do have a few Ole Miss alums in the family, but we love them anyway. I am sure you can pick them out from the group photo. After a few photos we headed to the game. Unlike the cowbell clanging walk to the stadium, standing in the cue line to enter the game is very quiet. You don’t see a cowbell or hear any clanging (they’re technically not allowed). It isn’t until you emerge from the ramp and see the field that you start to see bells coming out of purses, out from under coats, and from the backs of blue jeans. But don’t tell the SEC or NCAA my secret hiding spot. 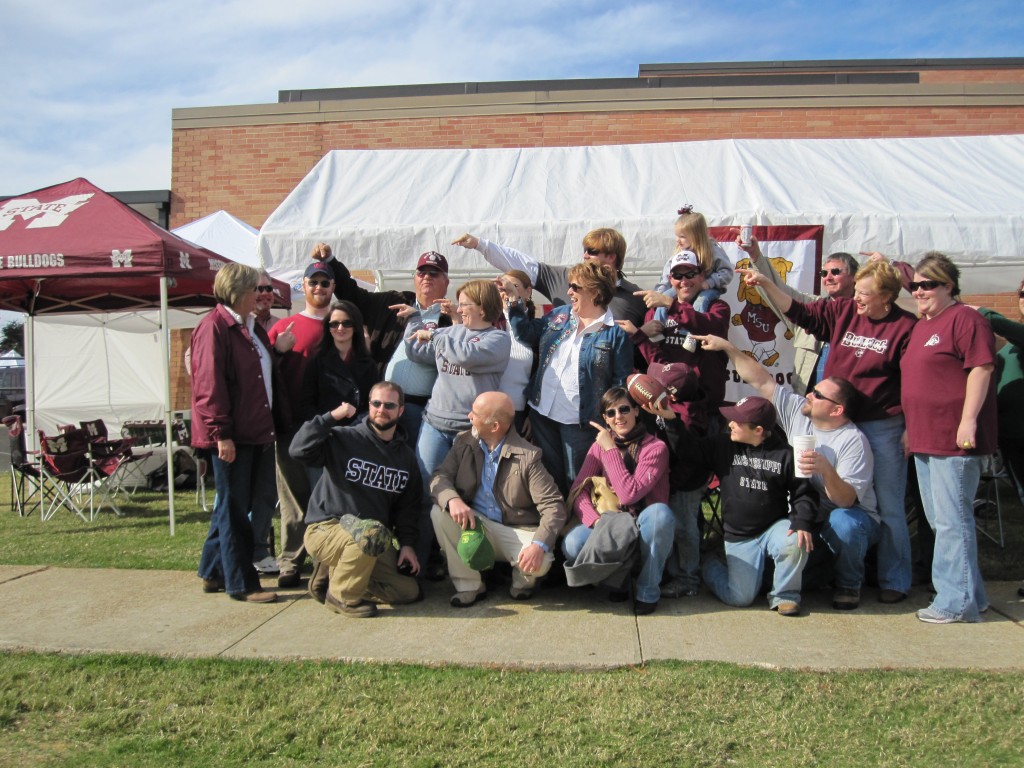 The first and second quarter seemed like typical Egg Bowl football, emotional but sloppy play. My whole family sat together in the shadow of the jumbo-tron. Lucy seemed sleepy and the boys just wanted to know who would win the game. Every five seconds Reece would pull on my pants leg, “Who’s going to win, will it be Mississippi State?” Mom and Dad left at the half to join the family back at the tailgate. They enjoyed drinking coffee and watching the game on TV with family. After the game, we all thanked my Dad for leaving. State plays awful when Daddy is watching. I remember one Thanksgiving where Mississippi State was beating Eli Who? (the guy who doesn’t have his own website). We had to stay quiet and at times mute the TV to keep from waking my Daddy. We all knew State would loose if we woke Daddy up!

I have heard that there was a clock in State’s locker room. It was counting down from some point this spring until today. Dan Mullen said that he looked forward to Thanksgiving weekend. He looked forward to the sound of those cowbells ringing in celebration of a victory. Mississippi State has had one of the toughest schedules in the nation. The Bulldogs played six ranked opponents at home this year. They faced #1 Florida and #2 Alabama and lost. Even so, Mississippi State could remember this season as a success if they won the Egg Bowl. All the hard work and planning paid off for Dan Mullen and the Bulldogs! 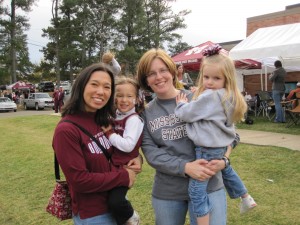 They gave us so much to ring our bells and there were many cowbells that lost their clappers. My dad tells a story about ringing his cowbell so much the clapper fell out. I have never experienced this phenomenon until today. Early in the third quarter when things started going States way, I noticed a wounded clapper under the stadium seats. Later Chris’s clapper went flying through the sky. The girl a few rows above us lost her clapper. Then finally at the end of the game something hit me in the shoulder. Guess what it was another cowbell clapper. Either they don’t make cowbells the way they once did or there was just that much ringing in the stands today! When you ask for more cowbell, make sure it is built well!

It was only fitting that I saw my good buddy Jennifer D. Davis after the game. We have shared digital cheers on Twitter and Facebook this whole season. Today, we got to enjoy the win face to face. It was a great day for State and a great day for my family. I was able to visit with family and friends! Leaving the stadium ringing my cowbell was so much fun! Now, we have to rebuild Chris’s cowbell!

This entry was posted in Mississippi and tagged Adventure, Camp of the Rising Son, Family, Football, Mississippi. Bookmark the permalink.