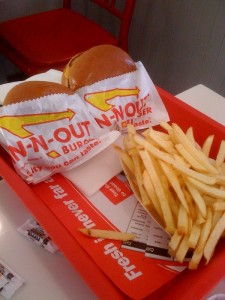 Attention Southerners!!! There is something better than Chick-fil-A and Hardee’s, and that is In-N-Out Burger. It originated in southern California in 1948. Harry and Esther Snyder’s business philosophy was to give customers the freshest food you can provide with friendly service in a clean environment. Today it is still privately owned by the family which still holds true to the early ideals of the restaurant.

I learned about In-N-Out on my first recruitment trip to Arizona. Snapper and I stayed in Phoenix that year. We saw an In-N-Out every five miles. Curiosity got the best of us both and we were forced to find one. There is an epic tale of almost dying in a horrific rental car accident, but all I can remember now is a ladder in the back of a truck and turning into the restaurant was dangerous. Since that faithful day, I have eaten In-N-Out on each trip to the Southwest. It’s a yummy tradition!

I am always fascinated by the companies that can keep it simple and succeed. I know that fast food is unhealthy if eaten at every meal or to an extreme, but it is so good as a snack every once in a while. Look at McDonald’s; they seem to re-invent themselves every four or five years. They also have to look out for the ladies who will spill hot coffee in their lap and sue the pants of the company. McDonald’s is not simple. They have frozen food, microwaves, and heat lamps, while In-N-Out make their burgers fresh right after you order one. Yes, this makes it not so fast, but their customers don’t seem to mind.

Companies that stick to what they are good at seem to succeed! Why does every company have to get so big that they lose touch with what they are good at? Look at the banking industry. It has been said about the government bail out that AIG and Goldman Sacks got so big that it would be unhealthy for the whole economy to let them fail? I simply don’t agree with that statement. They grew too large by doing unhealthy and unsafe business. The banks that were bailed out should have not risked so much. So much they couldn’t recover. Just like people who eat fast food every single day. They become so unhealthy they can’t risk any more.

In America we think BIG! We want big cars, big companies, big stadiums, and now big government. Why can’t we just be lean and mean. Moving around town is easier for a Volkswagen Bug than it is for a Sherman Tank. We are becoming over inflated in all that we do. Americans have become lazy. They want their Big Mac and they want to have it their way too! At In-N-Out there are five items. You can order a Double-Double, a Cheeseburger, a Hamburger, French Fries, or beverages (shakes and soda). Not that complicated. No wraps, chicken wings, chili, or breakfast items. Their menu is simple and to the point. Why can’t we all get back to the basics? Why can’t we live by the K.I.S.S. method – Keep It Simple Stupid?

It is refreshing to order a freshly made cheeseburger for $1.99 and it is not on a “value menu!” Why can’t life just be simple, why do we have to over complicate it? Then I think, “Silly Ruth!” How ridiculous am I asking for a simpler life when I am sitting on the floor of an airport terminal with my laptop out chained to the power outlet using free WiFi and writing a blog! I guess we have gone too far down the road of complexity. I can’t have a simple life without my iPhone and laptop. But I do wish I could have In-N-Out more often than once a year.

This entry was posted in Adventures and tagged Arizona, In-N-Out, KISS. Bookmark the permalink.

1 Response to Lessons from Hamburgers