Sunday, I completed an Ironman 70.3 in Augusta, Georgia.  Some would say it was crazy to swim, 1.2 miles, bike another 56 miles and after that run a half marathon (13.1 miles).  For me someone who hated the track in high school, yes it was a crazy idea.  But just crazy enough to do it.  It wasn’t some half brain, last minute idea I am known for concocting. It was an adventure started two or so years ago.

I arrived in Augusta, Georgia in the early afternoon Friday.  I passed a giant wall of green trees and bushes. Then I realized it was golfing holy ground, Augusta National Golf Club, home to the Masters.  Shortly after this golfing discovery I arrived at packet pick up.  This whole process was quite overwhelming.  My heart pounded as the volunteers walked me through the process of health forms, giving me a t-shirt, and putting on my wrist band. Strangely enough it seemed a lot like Space Camp.  Never-mind that, it was scary to think in less than 48 hours I would have to go for 70.3 miles.

After this process, I did what any good southern girl does.  I went to meet the locals!  I met Harvey and his wife at TGI Fridays. Harvey is a bonifided, card carrying space geek and his wife was a sports fanatic. Obviously, we hit it off.  The topics of Homer Hickam, Werner von Braun, Apollo 13, Norte Dame football and triathlons wove together in a way that would make ESPN Sport Center and NASA TV proud.  Ok… that is exaggerated.  Chatting with this couple put me at ease and reset my spirits.

Saturday flew by like Superman on speed! Sunday morning came. The crazy thought of doing a half Ironman was here!  I was one of the first runners in transition on Saturday morning.  Everything had been planned for and packed away in my transition bag.  It was dark and early morning, and seemingly crazy to think in less than three hours I would be in the water swimming in a half Ironman.

At 8:36am the horn sounded and we were off.  Swimming was something that came easy to me.  But swimming in a river, under bridges and around boat docks seemed extreme.   I swam stroke for stroke with two other participants for what seemed like a mile, but I was only at the half-way point when I passed them.  Out of the water I looked at my watch, 29 minutes.  Off to the bike, but first there were strippers at the race!  Yes, strippers! There were volunteers at T1 (Transition 1) to help participants take off their wet suits.

I started the bike very tentatively and unsure.  I had less than 50 miles of experience on my new Quintana Roo TT bike.  The day before, Karen Hall and I drove the course.  It seemed fun and it was fun!  The further into the ride I got, the more confident on the bike I became.  I was having FUN!  The climbs were not severe and the straight aways were fast!  I followed the plan I had in my head.  Things were going well as I dropped the hammer down on the bike. 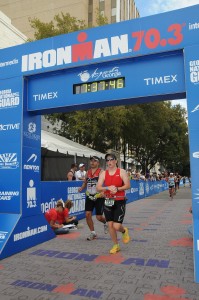 I ended the crazy 56 miles on the bike my butt seemed to be the only part of my body that was tired and fatigued.  I rolled into T2 with a great deal of confidence and pride.  I finished my bike in 3:07!  I thought, I can do this.  I gave myself a 7 hours goal. It was just at 3:40 race time when I started my run.  There I was running at less than a 9 minute pace.  I knew that wouldn’t last.  I slowed my pace at the 1.5 mile mark and tried to settle into the run ahead.  I was strong and felt good until a giant grizzly bear jumped on to my shoulders and started to wrestle me.  My confidence welted.  The bear was heavy.  I started to walk and frustration and doubt set in.  The bear was winning.  My first thought was Marcia would walk and run.  I can do this!  But the bear was still winning.  There were church steeples and bell towers along the route.  I thought of the verse in Philippians, “I can do all things through Christ who strengthens me”!  Just recover, fight the bear!  So I did! I walked though the aid stations and then got my legs back to finish this crazy race!

The first crazy idea I had was joining a master swim class at the YMCA in early January 2012. Later that week it seemed like a crazy idea when Amazon, Speedo, Snapper and myself decided to go camping on the coldest day in 2012.  However, on that camping trip in the freezing cold we agreed to go on a crazy adventure.  We made a pact to run Warrior Dash in Georgia May of 2012.  Swimming, running and obstacles made doing a triathlon seem tangible, and with my training buddy Snapper it was not crazy! Over the last two years, I have imagined doing lots of things.  Some have seemed crazy and some have seemed reasonable.  However the crazy ideas have been the ones that have pushed my limits and made me dare to dream new dreams for myself. Crazy or not, the last two, nah, the last three years have been remarkable.

This entry was posted in Races/Events and tagged Adventure, Friends, Georgia, Ironman, NASA. Bookmark the permalink.