Against Our Better Judgment 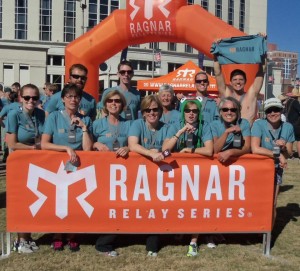 It has been a week since our team completed the Tennessee Ragnar Relay.  It took months to prepare for our Ragnar adventure.  So it is fitting that it took me a week to write about this experience.  Our team was made up of families and friends.  Whether we were all close friends or met for the first time last Thursday, we now have a connection which is rooted along the highways that lead us from Chattanooga to Nashville.  There is a mutual respect and gratitude we have for each of our team mates.  Let me tell you just a bit our our epic adventure.

I had never heard of Ragnar until I stumbled across a race brochure in Fleet Feet here in Huntsville for this crazy adventure.  I had heard from Sandy a few months before about Hood to Coast, the grandfather of all 200 mile relays.  But really, I was completely uneducated by what this relay would be.  Sandy and Snapper immediately committed to forming a team. I knew my friend Amazon would surely join the insanity, because at the time she was riding her bike from Maine to Key West! She and her bother Rob would soon commit.

It wasn’t until a Sunday afternoon dinner in Madison where the Ragnar team became a reality.  Snapper and I talked about this possible adventure while sitting on her aunt’s front porch. This is when Chris and her friend Barb committed to running. Kitten would soon join the team. On a whim I started text messaging counselors and staff from Space Camp.  Ham thought it was a 200 meter relay.  Sometimes text messages can be deceiving.  I asked Marcia to join our team. Surprisingly she said yes without skipping a beat. It didn’t take much to convince Ham and Shaggy joined our team.

Now we had a team, next up was a team name and logo. The logo was a joint project by Snapper and her Uncle Russ which would take some time, because we needed a name.  Our first option for a team name was the Chuck Drivers, because Sandy and Marcia’s husbands both named Chuck would be our van drivers.  This name didn’t catch on. Eventually, Marcia would suggest Against Our Better Judgment.  I think at that moment I really felt like we had a team and would make it to Chattanooga.

For me training didn’t come easy.  I had a knee injury in mid August that would side line me for weeks.  I only swam for weeks and didn’t start running again until the Racin’ the Station duathlon in late September.  I honestly think that I wouldn’t have been ready to run if I had not started to work nights at Space Camp in mid October. I ran in the mornings and worked at night.  I was ready, but still not a lightning fast runner.  Amazon, woke up one morning during her training and ran a half marathon.  Let’s be honest, Amazon is a freight train!

November finally arrived.  Hotels were booked, rental cars secured, training was over and our team was making their way to Chattanooga.  We replaced a runner at the last minute for an injured team member.  Dena would be a tremendous asset to our team.  Ragnar goes through her home town, so for years she had wanted to run this crazy relay.  She would get her chance and we were thankful! Wow, I am at 567 words and I haven’t got to the running. 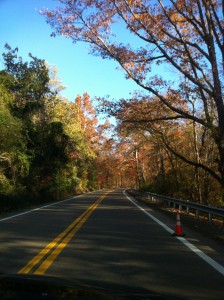 The morning of the race came.  Van 1 was at the start line with Sandy leading off the race for Against Our Better Judgement.  It was foggy in Chattanooga and not the best conditions for running in morning traffic.  Sandy was a trooper and we quickly learned the routine of supporting our runners.  Really nothing except starting the relay could prepare us for this adventure.  The miles clocked by and it was Snapper’s turn to face the climb up to the Cumberland Plateau.  She muscled up the mountain passing many runners.  Barb smoked down the mountain Snapper climbed.  Barb passed the baton to Chris, who would pass it to me.  It was now my time to run.  The whole reality of Ragnar was not real until the orange slap bracelet was around my right wrist.  It was my time to take our team further down the road.

As I finished my run, I would learn quickly that I loved to see Marcia in the exchange shoot.  She would cheer me on the final few meters of my run and off she would go.  My next step was chocolate milk and the car chalk to dot my first leg.  We kept track of our progress by marking off boxes on the van windows.  Van 2 would mark off the miles after their runs.  Running this crazy Ragnar relay is really just completing one small step, followed another small step.  Progress was marked by our victories along the way.  It was so motivating to finish a leg and cheer on the next runner.  After Marcia completed her leg Van 1 was off and Van 2 would continue on.

The exchanges between Van 1 and Van 2 were far too brief.  We loved seeing our team mates and wanted to know more about their adventure.  We enjoyed hearing about the play list of van 2, the fact Rob ran each of his legs shirtless, and the fact Amazon got blue all over her from a porta potty… yuck!  Van 1 would drive along the relay route to a Dollar General and then rest in a field behind a middle school.  It would soon be our time to run again and darkness was upon us.

Darkness was the one variable we really didn’t consider.  I think we all felt like there would be more light, more people and more comfort along the dark roads.  It was tough running through the night.  I took the baton near Lynchburg.  I enjoyed running in the dark because I felt like I was on the county roads near my home in Mississippi.  I saw opossums and two deer along the way.  There were some scary dogs, but I tried not to let them bother me.  I have heard dogs smell fear.  It was on this leg that I got my only road kill. Forgive me team, I am slow!

We would see Van 2 quickly at Moore County High School and there we would start our off time.  It wouldn’t be a long off shift, Van 2 smoked through their legs.  Our naps would be cut short and we were running again.  These early morning legs were very difficult but our runners rallied together.  Chris had the darkest and coldest leg of all the race.  Seeing her commitment to the team to push on was awe inspiring.  Others on the team ran along side her, Barb ran the first 2.5 miles along side Chris, then Sandy and finally Snapper. The greatest thing I experienced during this adventure was the commitment each runner had to the team.  We couldn’t let any of our team down.  We had to make it to the finish line. 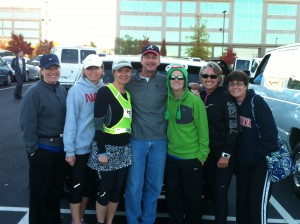 Van 2 would take over shorty after I finished my last leg.  They had the sun beating down on them while Van 1 made our way to Nashville and the finish line.  We showered, which was a team sport as well.  Marcia and Barb showered in the fitness center showers sharing hair products and mascara.  Sandy, Snapper, Chris and myself rotated through the shower in our hotel room.  I am not sure about Chuck, but he was clean when he joined us. I remember being so eager to make our way to the finish line.  I wanted to see the rest of our team mates.

I think my team mates would all agree with me, the hardest leg for each runner was their third leg.  We were mentally and physically exhausted.  To complete our finial legs, we had to pull our strength from somewhere else.  One of the most touching memories I will carry forward is Rob, Amazon’s brother, running to join Amazon to finish the race.  We all needed a little bit more to finish the relay.  Hymns and Bible verses, cheers and chats pushed our runners along the final stretch.  We did it! We finished the relay.  Twelve friends joined together to get us from Chattanooga to Nashville! It is one of the coolest things I have ever done.  Thank you team! Thanks for every memory!