Last year I had a lot of fun with my year in review blog. Therefore, I made an executive decision to continue the tradition this year. The year 2009 was a great year for me and my hubby Chris. We spent most of the time sleeping under the same roof which was a drastic change from the previous four years in our marriage. During the year I took an exploratory outlook on life. I returned to the Barn after a ten month break and began blogging about the misadventures of the Barn. It was a year of great highs and a few lows, but overall it was a wonderful year! Here are my top ten moments of 2009!!! 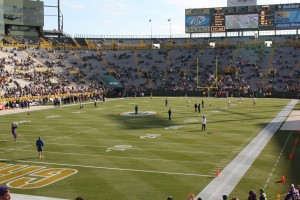 10. Trip to Wisconsin: Visiting Lambeau Field would have been great if I had seen just any game. However, our visit to Lambeau field was for the Packers vs. Vikings game; the game where Brett Favre returned to the Frozen Tundra, his former home. The best part of the road trip was sharing the adventure with my mom, dad, and Chris. The part that sucked was throwing up in the back seat of my mom’s Lincoln Navigator. All is well in the world, and Brett Favre was victorious!

9. Arizona Traffic School: This doesn’t sound like it should be a highlight of my year’s adventures. However, the recruiting trip to Prescott, Arizona is one of my favorite work assignments. During the fall, Snapper and I made our way back to Embry Riddle for the third time. On the trip into Prescott, a traffic camera caught me speeding. I am well versed in what to say to an officer when they pull me over. I was left speechless when I received a speeding ticket in the mail. One Saturday morning in December I played Mariah Carey music while I completed my online traffic school. The only thing that would have made Arizona traffic school better would have been a PBC Wedge from the Prescott Brewing Company.

8. The Plumber App: With a Twisted Taco cup in one hand and a crescent wrench in the other hand I attempted to fix my tub’s broken facet. I am not a plumber nor should I ever become one. In this attempt I broke my Motorola Razor and made way for my darling husband to purchase me, at long last, an iPhone with Plumber App. Looking back at this mini adventure and all the laughs it was well worth the mess I made in my bathroom.

7. Flaming Hookers: I am not going to tell the whole story, but the night of the Space Camp Hall of Fame a few friends and I continued the party at a local watering hole (ATO). This is where I was introduced to a Flaming Hooker. No, it isn’t a lady of the night who is being cremated. It is a drink made popular to space geeks in the book Riding Rockets. This story really isn’t the highlight but gives a great example of the fun I have had socializing with friends, astronauts, and space geeks. The top memory for me wasn’t the night of the hall of fame, but happened a few weeks later when I visited with a few members of STS-125 and Hoot Gibson. It was great sharing Story stories with Michael Massimino. Now I know how the bolt on Hubble was over torqued. 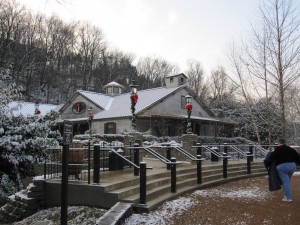 6. Becoming a Squire: Last year while standing in line at Jack Daniel’s, waiting in the bitter cold to have bottles signed, Divot and I made a commitment to visit Lynchburg on a regular basis until one or both of us were Squires. In April of 2009, I received my deed to land at Jack Daniel’s making me a Tennessee Squire. Divot and I continued to visit the distillery and go to bottle signings. Visiting Lynchburg is fun, and being a Squire is a big deal to me!

5. Houston in February: Right after training dozens of new Space Camp counselors, I get away from my job by flying to Houston Texas to attended SEEC. Yes, it is a vacation to me! Learning more about space may make me a space geek, but hanging out with teachers from all over the U.S. is fun to me. Hanging out with my friend Rhonda is a plus! Last year we took a break from the conference to watch Pat Summitt win her 1,000th game as a head coach. I think Urban Meyer can learn a few things from Pat Summitt. She has 8 NCAA Championships over 35 years of coaching. Meyer has two BCS Titles in his young career. Coach Summitt, Rhonda, and NASA are all pretty dang cool!

4. Bourbon Trail: In late August I took a road trip to Kentucky. I was all by myself on this excursion. I visited Mammoth Cave and five bourbon distilleries. Along the way I learned a lot about Kentucky’s history, how to make bourbon, and why Jack Daniel’s is the best whiskey. True, you may think I am a traitor for visiting Jack competitors, but I wanted to see for myself what the difference was between Kentucky Straight Bourbon and Tennessee Whiskey. If you decide to visit the Bourbon Trail, make sure you visit Maker’s Mark and Woodford Reserve. By far, those two distilleries have the best tours and a better product than the other bourbons. 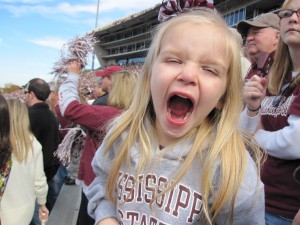 3. Lucy’s Bell: What do you get when you mix family with Mississippi State tailgating? The answer is, the best Egg Bowl ever! It was Lucy’s first Egg Bowl so she got a brand new pink bell from the Barns & Noble at State. Mississippi State gave Lucy and all their adoring fans lots of reasons to ring their cowbells this year in Starkville. Once State took the lead in the third quarter they didn’t give it up again as they pounced on Ole Miss 41-24! I know there have been bigger wins in MSU history, but for me this was the best one ever! My whole family was there for the game as we joined my aunts and uncles for pre and post game refreshments. Days and games like the Egg Bowl can show everyone outside of the South why SEC football is so near and dear to its followers!

2. Epic Return to the Barn: I left work at the Barn in the spring of 2008 just shy of five years with the store. I didn’t think I would return, but in March of this year I did. I was surprised after returning that I love working at the Barn more now than ever before! There is something about it. It is like when I left I was simply a Barnyard Hand in Training. Now, I feel like a Barn Ninja. And on top of all the fun I have working at the Barn, when I get home I can write about working at the Barn. It is truly the gift that keeps on giving. Working with characters (boy, are they characters) such as Hudson, Manhattan, Josephine Bedding and all the others is fun and enjoyable. Isn’t that what we should want in any job? 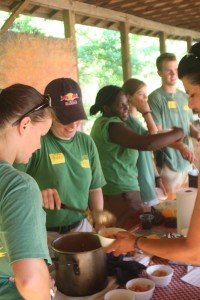 1. Chief Reunion: In late July Chris and I visited Camp of the Rising Son for its 30 year reunion. Wow, CRS has been around for 30 years! I enjoyed visiting the camp that gave me my start as a camper and my first job as a camp counselor. It was wonderful visiting with old friends, I mean Chiefs. The whole process was a blessing as I reconnected with so many people. One of the highlights for me was my team winning the Camp Stew Cook Off! The secret is in the bacon! Unfortunately for me, some stories of the past did surface. I would like to tell everyone reading, I am truly sorry for tossing a bucket of water on a past Chief. And yes, the bucket had a few frogs in it. As a camp manager, I have learned that pranks are bad for camp.

Camp is my life! It has molded me into who I am today. I am a rambunctious, redhead who isn’t afraid of adventure. I love my family more than camp, but it is good going to a job you love every single day. My job has given me a lot of the experience listed above. I am lucky to have a great life surrounded by people I love, and who I think love me, or at least they don’t dislike me. So I am looking forward to the adventures of next year, and the next decade. I wish you all a very Happy New Year!