On April 17th of 2004 Chris and I exchanged vows in the presence of our friends and family in Winona, Mississippi.  One year later we both unknowingly committed to purchasing traditional anniversary gifts for one another.  The next year we made it a tradition of ours to give traditional gifts when I gave him a bale of cotton.

This year was no different.  We’ve been married for six years now and the anniversary is iron. So as I type we are watching Iron Man.  See how quirky we are.  The point of the blog is to republish the story of our cotton bale, this time as it should be, with a photo of the bale. 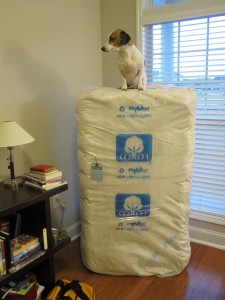 According to “the lists,” the twenty-fifth and fiftieth wedding anniversary silver and gold gifts are familiar to most people.  Those same lists contain more obscure gifts like wood, iron, tin, and cotton for lesser marital milestones.  In a world of MP3 players, digital cameras, and video games, it can be difficult for a young couple to find an acceptable gift from a list published in 1937 by the American National Retail Jeweler Association.

I set out on a mission to find a new twist to the old list. The simple fact that I am Ruth Marie Oliver, a cotton farmer’s daughter, meant the common ideas for the second anniversary cotton gifts of shirts and sheets would not do for me.

My childhood memories revolve around cotton farming. My daddy, Bobby Oliver, has been farming land in Carroll County, Mississippi nearly all his life. My grandfather, Sandy Land, grew cotton and owned a gin in Winona, Miss.  I have so many memories of visiting with my grandparents in the office of the gin where my parents met and started my story. My parents say they drank coffee to pass the time.  I remember drinking ice cold Coca-Cola and eating homemade biscuits and sausage my grandmother, Ruth Land, made when I visited the office of the Land & Lott Gin.

My second anniversary dilemma: “How does a woman with cotton in her vein do justice to cotton? How could I let the second anniversary go by with out giving my husband, Chris – the love of my life – a piece of my childhood, my heritage?”  The idea of giving a full sized bale of cotton came to me while I was at work. I thought if there was anyone who could find a bale of cotton in the middle of April it would be my daddy. He was a bit surprised by my request. After that conversation I though I would have to settle for a small bale similar to the ones they sell yankee tourist.

My dad called around to his friends in the farming community. I was just as surprised as he was with my original request when he called me back to tell me that Emmett Chassaniol, who markets his cotton for him, had helped him locate a bale in Greenwood, Miss.  Then the problem became how to transport it from Winona to Huntsville, Ala., without my husband finding out.

On a spring day similar to our wedding day, I met my parents, Bobby and Shirley Oliver, just north of Tupelo, Miss., at the Dogwood Valley rest stop on the Natchez Trace Parkway to exchange the bale from truck bed to truck bed. My next challenge was that I have never been good at keeping secrets from my husband.  So, smuggling a bale of cotton into the house without any suspicion was truly difficult, but I had help from my friends.

Once home, I kept the cotton in the bed of the truck covered with a tarp until our anniversary. Over the next two days many ideas of what it could be ran through Chris’ head. But he never guessed anything close to a 500-pound bale of cotton grown in the hills of Mississippi.

On our anniversary, April 17, 2006, I took Chris outside to uncover the gift. He asked, “What is it?  What does it do?”  But when he saw the Cotton Incorporated logo on the bale, he knew that it wasn’t mechanical. It doesn’t do anything but clothe the world and support families like mine.

Currently, the bale sits is in the front room of our house in the corner as a testament to our quirky mix of modern and traditional love for one another and because, quite frankly, it’s too heavy to move anywhere else.

Ideas for making it into a coffee table or ottoman have been discussed. But Chris just likes to show it off.  I like to think it shows people how much I love him.  There is one thing that is certain. No matter where we go, the bale of cotton will go with us, no matter how hard it is to move.

Originality published in the October 2006 issues of Cotton Farming magazine.

This entry was posted in Mississippi and tagged Chris, Cotton, Family, Farm. Bookmark the permalink.