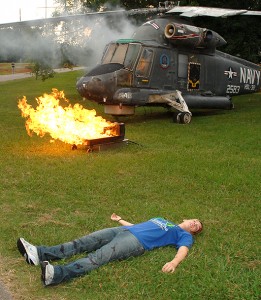 Let’s travel back in time thousands of years ago when dinosaurs roamed the earth. They lived in harmony with the universe. They snacked on the leaves and trees around them. Suddenly a meteor tore through the atmosphere and changed the living conditions on earth. The dinosaurs were not prepared when disaster struck. They didn’t have an emergency kit, an evacuation route, or a weather radio to listen to updates on the ice age. As humans, being smarter than our prehistoric friends we should learn from the tragic end of the dinosaurs.

Now let’s travel back in time just a few years ago when Be Ready Camp didn’t exist. During the last week of July 2006 I was called to a meeting with directors, VPs, and a few people from Montgomery. It was a two hour meeting where a few guys from Madison County EMA, some ladies from the Governor’s Office of Faith-Based & Community Initiatives and the Aerospace team invented Be Ready Camp. It was filled with tours and PowerPoint presentations. At the end of the camp experience the kiddies would respond to a mock disaster. A disaster where all hell would break loose, the kids would act as the first responders and save the day.

The first day of camp arrived and it was dull and dry, boring and bland. Sixth graders were dropping like flies to homesickness and boredom. I had to find something to save the day. I went to the dollar store in search of the holy grail of camp salvation, something to make the preparedness game not so lame. I found multi-colored foam dinosaur stickers to save the day! Thus starting the Be Ready Camp tradition surrounding the dinosaurs, from that day forward, the battle cry was “Don’t be like dinosaurs, BE READY!”

Be Ready Camp has grown into more than just kids from Madison County into a state wide event. Be ready Camp is now held on multiple weeks for more than 150 students. BRC’s success is not because of the dinosaurs, but each September reminds me of the dinosaurs. The success of BRC has lots of people to thank, Bowtie, Popeye, Google, the guys and gals at GFBCI, and all the volunteers. The staff at camp look forward to Be Ready Camp and we have way too much fun.

The first BRC we had a kid who was an evacuee from New Orleans. All the campers are given CERT backpacks and taught how to make an emergency kit. This kid cherished everything we gave him. He wore his CERT vest everywhere. We called him Vest. Some of my favorite kids have come from at risk areas and homes. Those are my favorite kids. Ocho Cinco was so funny and one of my favorites! Some other great kids were Beef & Cheddar, Bones, and Swoosh. The kids come from all over, they are paired with a battle buddy, and they are trained to be a hero. I don’t really know why, but Be Ready Camp is the best camp of the year!

Back to present day, BRC has grown from tours and silly stickers to a solid camp where kids learn life preservation. “Big head, little arms, T-Rex!” is our cheer! The volunteers walk the kids though being a first responder. Even the heater meals taste good. There has even been an ice cream social and evacuation for a gas leak after hours. Next week will be BRC 4 and this year we will have just as much fun and excitement in years past. But knowing the kids are learning something that could save the human race from extinction. “Don’t be like dinosaurs, BE READY!”

One thought on “Dinosaurs & Heroes”