Be Ready Camp in Review, Part 1 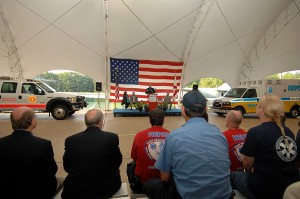 Because I didn’t have a lot of time to write, this post will be a collection of random thoughts about this past week of Be Ready Camp. This week was a huge success and we only lost four campers to homesickness. The mock disaster was truly amazing yet again. All the victims were rescued and the kids had a tremendous time.

The remarkable thing about BRC is how much the campers mature over the course of four days. They grow more confident with each activity that goes by. Some kids come to camp thinking they can’t make it without being on their friend’s team. Then you see them make friends with other kids. Some kids start camp thinking “I can’t save someone’s life or rescue them from a burning building.” But on Friday you see all the kids take charge to respond to a disaster. BRC is the best camp experience that teaches preparedness for disasters and for life!

The staff this week was so great! Support helped out and went the extra mile! On Thursday night we had the “Three Amigos” helping with clean up, search and rescue, and all the thousands of other things we needed to accomplish. Slip Knot and Snapper taught the kids triage and search and rescue skills. They also keep me focused and on task. Tank and Biscuit were team leaders. God bless them both, they had special campers. One word, Sugar! Divot was a slacker; he had a wedding to attend!

Friday night’s events grew into something bigger than what we all had first envisioned. Friday marked the eighth anniversary of the terrorist attacks of 9/11. It was also the first National Day of Service and Remembrance. For a month or so we had planned for a small ceremony to honor the first responders and highlight the kids’ mock disaster! First they wanted Governor Bob Riley to attend, then it was Senator Jeff Sessions and finally at the last minute it was Congressmen Parker Griffith. On Thursday morning, the governor’s office sent out a press release declaring our little ceremony the state’s official remembrance service. Small event turns big in a blink of an eye. 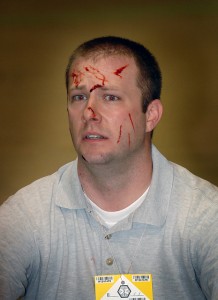 We had channels 48, 31, and 19 at the event! The Huntsville Times did a really great write up on the event and talked to the kids. One camper lived in New York during the attacks. HEMSI and Huntsville Fire had trucks under the bubble for show. Once the event was over, we all scrambled to place victims, turn off the fire alarm system, set up the demo explosions, and brief the overly anxious kids. It was chaos!

Shortly after the disaster started we had MedFlight circling above. We had kids scattered with everyone looking for people to help. We also had news reporters and camera men chasing the kids wanting to get a word or two with them. One camper pushed a reporter out of the way saying, “I am helping save a life. I will talk to you later!” There were 57 kids acting as first responders and 67 UAH nursing students acting as victims. The fire trucks roared in as the campers extinguished smaller fires. HEMSI ambulances arrived to take victims to safety and the water rescue squad deployed boats in the lake.

The victims were rescued and the kids were put to bed. Gobble was a nervous wreck by the end of the night. She was transportation officer, the most stressful job at BRC. Sugar was bouncing of the roof of the bubble but all was good. The only hiccup from the time of the mock disaster until grad the next morning was not having a bus on Saturday morning.

BRC graduations are such a festive event. Almost every parent is clad in crimson or orange [Roll Tide / War Eagle]. But the pride they have for their child is more noticeable than the SEC logo on their chest. When Peanut received the Right Stuff award her mom leaped up with excitement to hug her! In all my years, I have never seen a parent hug a camper after winning an award. All the parents were proud and all the kids were walking a little taller because of BRC.

This entry was posted in Camp and tagged Aviation Challenge, BRC, Space Camp. Bookmark the permalink.