Babe Ruth was a legend in his lifetime. He played in the major leagues from 1914 with the Boston Red Sox until he retired with the Boston Braves in 1935. His glory years were spent in New York where he helped to win four World Series wearing the navy pinstripes. He is known as a great all around baseball player. He started with the Red Sox as a pitcher and then became one of the most dominating hitters of all time. The record he is most known for is his 1927 home run record of sixty home runs. It wasn’t broken until 1960. 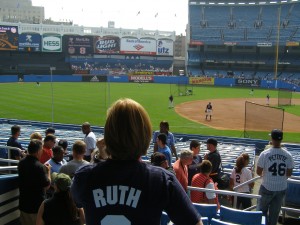 George Herman Ruth was a larger than life player. He was known as “The Great Bambino” and “The Sultan of Swat.” He lived large and swung a big bat. But when his stats started to decline and he had to have other people run the bases for him he should have left the game. The fans attending his games would see him hit homers every once in a while, but not as often as during Ruth’s prime. Ruth has a measly .181 during his last season which was shortened due to his retirement. Ruth’s status in the baseball world was only slightly tarnished.

I think Ruth’s staying at the party too long laid the ground work for all the current greats to stay too long as well. Look at our most recent case of partying too long. Brett Farve, after signing his $100 million contract in 2001, said he was a “Packer for life” and he couldn’t “envision” himself playing for another team. He did retire as a Packer, but came back, and then retired as a Jet, and now has come back again.

Farve is not the first, look at Michael Jordon. He retired in his prime with three NBA titles. Jordon tried playing baseball… what was he thinking? He did return to the Bulls to win three more titles. Phil Jackson’s contract expired and the possible departure of Scottie Pippen created a perfect time for Jordon to retire. He went out on top with the epic shot with ten seconds remaining to take the lead. The Bulls built a monument to number 23. This time it would be for good, right? No, the 1998 NBA finals was not his last game in the NBA. We would be forced to see a great looking uncomfortable on a court in purple of all colors.

Another great who took Ruth’s method to retirement was Jerry Rice. Rice won three Super Bowl rings while playing in San Francisco. He left the 49ers at the end of the 2000 season for the Raiders. He didn’t do awful, but did bounce around to the Seahawks and the Broncos until he signed a one-day contract with San Francisco for ceremonial cash so that he could retire a 49er. The good thing about Rice was even though his fans had to endure seeing him in black, then green, then orange; he, unlike some, had the good sense to come back home to retire as 49er, the team and organization that first gave him the opportunity play in the National Football League.

Emmett Smith left the Cowboys to add more yards to his rushing title. He found a spot to play with the Arizona Cardinals. He too signed a one-day deal to retire as a Cowboy in 2005. Unfortunately for some of us, we had to watch him on dancing with the stars.

Roger Clemens won seven Cy Young awards but still managed to tarnish his career not by bouncing around to other teams, but by extending his career beyond his prime by using performance enhancing drugs. Why? He was an icon when he played for the Red Sox. He could have retired in 1996 and been in Cooperstown by now. But no! Stupid self absorbed multimillion dollar sports stars don’t know when to quit. Clemens also worked an angle similar to Farve. He skipped out on training camp and signed a contract late in the preseason or early in the season. What does this say to the team? Some players can get away without all the preseason work.

I have come to two conclusions. First, we, the fan base, allow it. We would rather see our favorite geezer pass for one more incredible touchdown, throw one more no-hitter, or win one more game at the buzzer, than honor in retirement when they are in their prime. We, as fans, want to keep living the 1927 season. I am sure the players themselves want that as well. But life is all about seasons. Fall, winter, spring, and summer they come and they go. They bring us good times and bad times. That is the point of life. Athletes are young, strong and agile. They play during the spring and summers of their lives. Once fall arrives there are only one or two more great moments before winter comes.

Finally, they are all over indulged. They get fat checks, lots of attention from the media, and have thousands of adoring fans. I have never been as disgusted at the professional sports establishment as I was during the 1994 strike shortened MLB season and recently with Farve’s return (again). The Packers didn’t want Brett Farve so he took his ball and played on another playground. Three weeks ago we heard Farve say he wasn’t coming back. This week he said he does want to play. He is just as childish and immature as those kids on the playground that get mad and run away. PLEASE RETIRE!

I love Brett Favre! I am a Mississippi kid who remembers him leading Southern Miss to upsets over Alabama and Florida State. I saw him play in an NFC Championship game. I cheered when he and Green Bay won the Super Bowl. But I really wasn’t cheering on Tuesday. He is so full of Brett. Whatever happens this year I will watch number four, but with one eye closed. My fear is that it won’t be pretty. Just like Ruth’s last year. I love you man, just retire!