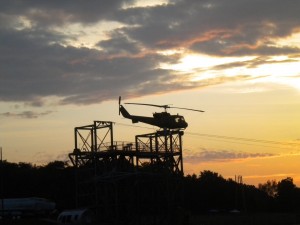 As I said good-bye to parents at graduation my boss walked over and asked if I was sad that summer was over. I admitted to her that it was sad that the summer was over. All the staff loves working by the lake each summer. It is a unique camp experience. We are all Space Camp employees 12 months out of the year, but when it is warm and there is water in the lake we become gung-ho military aviators and survival experts to our visiting campers. For most of us, the three or four months spent at AC is the highlight of our year. This summer was no different. So before we start shifting gears to Be Read Camp in September I would like to recap my favorite AC moments of 2009.

Scary Looking Ant: This one happened just this week. Slip Knot and Divot were down at the lake while I was up in a meeting… Always a pleasure to be in a meeting while there is fun at the lake. They discovered a very large, very hairy, red ant creature. The velvet ant took their attention away from their daily routine and to identifying the curious looking critter. They spend a large amount of time looking on the internet since no one in the office was an entomologist. Sweets was victorious in the race to identify the alien species as a cow killer ant.

I picked this as a highlight because this is so typical of our staff culture. We work hard, but if there is time to learn and find fascinating facts about a bug we will. We are all really close. From the youngest counselor to the oldest staff member (that would be me) we are family. We can help research a bug or give support in difficult times. The investigation of cow killer ants isn’t the first distraction for Divot and it won’t be the last for any of us.

Epic Mouse War: Early in the summer Snapper found a few clues that mice were plotting for a tactical invasion of the rail car. Late one night I received a call from Snapper that the battle had begun. I imagine Snapper was standing on her desk when she made the phone call and the boys were trying to kill the rodent with a paintball gun. I am sure this is just fantasy. No matter, we had a war to fight and the AC army was ready to get in the trenches. Two mice would escape that first epic battle, but over the course of the next two weeks we would win the Battle of T-shirt Racks, the Coke Fridge Battle, and the fire fight beneath the coffee table. We identified the master mind of this invasion. An old gray mouse, code named Jerry!

Jerry was a wise tactician. He knew how to survive and how to out smart the placement of our traps. He found a pipe to transport him from one room to the next. But he couldn’t compete against the strategies of Col. John Boyd. First we plugged the pipe with a lost & found t-shirt. Then to add confusion we moved the traps around on a regular basis. Jerry would fall August 2nd in the epic Battle of Copier Gorge.

This tactic of confusion would give us a few set backs. We didn’t find a dead mouse until it was too late. The office smelled like death for a few days. But some of the city staff did learn what a maggot looks like. It was very educational for the whole family. We have devised a signage system to prevent failure to locate mouse traps. These signs are also a helpful reminder to check the office for fallen solders. Currently the score is AC 7 and Mice 4.

The Staff: This year’s staff was a montage of veteran counselors, Space Camp cross trainers, and brand new nuggets. We had some summer only staff from the University of Georgia Tech, Notre Dame, Vanderbilt, Tennessee, and Oklahoma State, just to name a few. We had the Air Force and Navy ROTC represented as well as an Army Sergeant and an Air Force officer. Most of the brand new nuggets made up the Beemer Crew. They covered all Aviation Challenge programs, day camp teams, hybrid teams, and Pilot/Co-Pilot teams. They helped out wherever need. They worked hard everyday. The heart and soul of any camp is the counselor core. It is especially true at Aviation Challenge. The counselors and leadership team delivers day in and day out the mission statement of AC – to provide a realistic military aviation experience instilling pride, professionalism, and leadership in today’s youth for tomorrow’s future. They are great and I am privileged to have worked with them this summer.

The Return of 12 Day Camp: October 22, 2008 we opened registration for Mach 3 – 12 day. Shortly there after, the first team was sold out and followed by the second team selling out. We set up the best and most elaborate camp for the 32 campers who attended. We introduced paint ball, completed a 24 hour AC version of SERE, and had speakers like SGM Jerry Gleason, Hoot Gibson, Mike Durant, and Bob Springer. It was exhausting! But at the end of all the torture, long hours, clasped lung, gory first aid power point, and singing songs it was the best two weeks of camp this summer. I witnessed first hand 32 kids mature and grow into a team while making steps to be an adult.

Twelve Day wouldn’t have happened without the hard work of Snapper, Divot, Tank, Biscuit, Safety, Pan, Amazon, Plow, Mule and a host of others. We had volunteers who helped with SERE. Mangers also came in to help. There was the sales team and the administration that supported the crazy idea. Thanks to everyone who helped! It was so much fun!

So we close the summer and head to the fall. We have Be Ready Camp and SCI-VIS on the horizon. It is a bittersweet time. I am looking forward to some R&R and then I must start planning for training so we can do it all over again. It was a great summer!