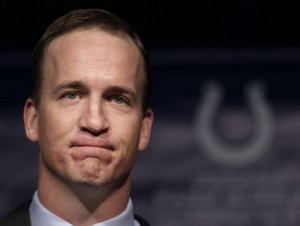 “As much as I love Peyton Manning… I don’t want him to play next year if he is not a Colt!”  That was my Facebook status during the week leading up to Eli Manning’s second Super Bowl win in Peyton’s House.  Skip forward to today, less than 48 hours away from Super Bowl 48 (I am not Roman).  Peyton is trying to win his second Super Bowl as his Bronco’s get ready to play in Eli’s House!  At the time I couldn’t imagine Peyton being in any other uniform than Colt’s blue & white.  Today, I can’t imagine Peyton in any better position than he is now; leading his offense to the top of the NFL.

I am very loyal to Peyton Manning, my boyfriend.  I couldn’t imagine him outside of Indianapolis, Indiana.  There is a children’s hospital named for number eighteen in Indy.  But in all of my loyalty, how could the Colt’s think of saying goodbye to Archie’s second son.  Peyton won my heart when he chose the University of Tennessee over Ole Miss.  Many Ole Miss fan’s hated Peyton for his lack of loyalty.  I loved Peyton for his A-plus decision making ability. I spent weeks trying to wrap my mind around the fact that some pimpled faced kid called Andrew Luck could be more important to the Colt’s faithful than Peyton.  I guess the marketing campaign “Suck for Luck” didn’t win me over.

I was in a very difficult place in my life.  I had just started to swim. Swimming lead to running and running lead to cycling and eventually I became a triathlete.  I remember thinking up and down the pool the multiple options of Peyton in the rainbow of colors that possible would be his future NFL uniform.  I had convinced myself he would be an offensive coordinator or my pool boy.  I would even build a pool in my back yard to make the later a reality.  But I really didn’t care.  I was hoping to see the Indianapolis Colts do something completely unselfish and renegotiate Peyton’s contract to keep him a Colt for life.  Andrew Luck would be drafted as his heir apparent which would make the world a perfect place.

We know that didn’t happen.  Peyton had to recover from four neck surgeries.  Bill Polian described Peyton’s come back as possibly the greatest of all time.  Both Archie and Eli knew how far Peyton had to overcome as they played catch with Peyton at the beginning of his comeback.  I am a Duke football fan because David Cutcliffe, Peyton’s offensive coordinator at Tennessee helped in the comeback process. And during this whole process, he had to find a new home, a new team in a new city.  Peyton never saw himself as anything other than a Colt.  I didn’t see him as anything other than a Colt.  However the reality, was he would be a Bronco. He wouldn’t be just any Bronco, he would rival the great Bronco QB’s of old.

I could tell more stories, but the fact is he did come back! Peyton is in New York prepping for his third Super Bowl with his second team!  Peyton had the very best season any quarterback has had to this point in the NFL! And finally, Peyton Manning is one of the best people you will ever meet, not that I have. On Sunday, win or lose, I will cry at the national anthem and cheer the Bronco’s to victory.  The simple fact is I was wrong on February 4, 2012.  I did want him to play.  I wanted him to continue to be my hero.  Thank you Peyton for fighting back from your injury.  You have given this 37 year old athlete something to strive for and I will never be a pro athlete!  Thanks for making me cry at each step of your record breaking season.  Good Luck and God speed Peyton Manning!

This entry was posted in Etc. and tagged Football, Peyton Manning, Super Bowl 48. Bookmark the permalink.