On March 1, 1872 the U.S. Congress established the first national park. The president at that time was U.S. Grant. The three states that contained the park, Idaho, Montana, and Wyoming were not even admitted in to the Union yet. Jack Daniels had only been making whiskey legally for six years. I really don’t know what Jack has to do with this story, but whiskey is important.

Today, my family visited the first park, Yellowstone National Park. We saw bison, swans, ducks, coyotes, bald eagles and my first water ouzel sighting. We saw geysers, fumaroles, springs and mud pots. We even saw the magnificent Snicker Predator (explanation to follow). Other than the U.S. military, interstate highways and commerce the only thing the U.S. government does remotely correct is the National Park Service. It was great to see the wilderness as it should be. The mighty bison, the graceful power of the bald eagle, and the rugged splendor of God’s creation.

We piled into a snow coach from Backcountry Adventures (BCA), which is owned by a nice man named Jerry. We have been renting our snowmobiles from BCA each morning, and every time we check-in at the BCA office, Mr. Jerry has given Lucy a Snickers bar to have just in case she became stranded on the trails without food. Wouldn’t want the Donner Party to happen to us Olivers. Each day Lucy wanted to eat the Snickers right off the bat. Each day she finished the luscious treat after her last ride. Today, as she contemplated when to eat, the might Snicker Predator was lurking. The Snicker Predator is not a wolf or coyote, but a wooly haired, mammoth like creature. We called them, Corey and Will. 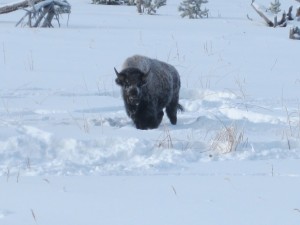 Corey and Will acted as our snowmobile guides. They were great and just as much fun as hanging out with the locals. Other than Corey and Will, today we had our snow coach driver, Skip. Being a tour guide at Jack Daniels I can report that Skip has two things in common with the tour guides at JD. First, he is a good ole boy who has a beard. Secondly, he also talked about whiskey. Inside Whiskey Flats in Yellowstone park, stage coach drivers would hide whiskey in the trees to later sell to the Army troops stationed at Yellowstone and the visiting tourists. Skip, being a good tour guide would ask us to say WHISKEY each time we posed for a photo.

Skip really made it easy to forget how cold it was outside.  Today’s temperatures were a little on the cold side. This morning we had a low temp of -19F. The only time it truly hurt was waiting on Old Faithful to erupt. My fingers and toes where aching. My nose, head and face were fine. Yes, I did have on my faithful Patagonia hat and Columbia scarf. The good thing about cold temperatures is it makes for glorious days. Wouldn’t want to play golf in this weather, but it made our adventure into the park fun and beautiful.

We ended the day with a wonderful ribeye steak meal. We really don’t need to rely on Snickers for sustenance; however, there is a new competition between Lucy, Reece, and Rhett: Who can keep their Yellowstone coins longer. Whoever wins, gets a 1921 silver dollar, just like the ones at the Silver Dollar Bar and Grill.

This entry was posted in Etc.. Bookmark the permalink.