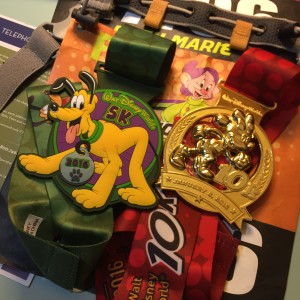 I think it was during the crazy snopocalypse during the winter of when I signed up for the Dopey Challenge at Walt Disney World in Florida. I must have been thinking, “I can have a runcation in early January in Florida… Bonus”! Little did I know what I was getting into. Since I signed up for this adventure, much has happened, especially shifting career fields. Undiscouraged by change, I am here and have successfully completed two races or 19.1% of the total challenge miles. Here are a few things I have learned about the Dopey Challenge.

It is an exercise in sleep not a running competition. A good friend gave me this advice before I left for the Land of Mickey Mouse. It is true. Sleep is your best friend! Don’t go out bar hopping or watching the fireworks over EPCOT or The Magic Kingdom. Put your pajamas on and sleep as much as you can. I feel like Ragnar Relay has been a valuable training excersice for this endeavor. I told someone that the Dopey Challenge is like Ragnar with a hotel room involved. It will be bed time soon!

If you don’t like Disney, don’t waste your time! You have to understand the magic of Disney and the wonder in the hearts of its fans to be able to bear the grumpy nature of the novice runner/walker. I mean no disrespect by saying this. However, etiquette is not high on the participant’s list. I have only seen 3 participants who have raised their hands before making an abrupt change from run/jog to walk/dead stop to take a photo of Elsa! I just let it go! There was one lady that I tapped on the shoulder because it was dark and I was about to buldoze her. She turned and spoke words that are not in Disney movies. Mickey would not have been happy! However, it is enjoyable seeing all the costumes, lines to have your photo made with characters and the volunteers out in their oversized four finger white gloves directing the race participants. I have to remind myself to”HAVE FUN”! It is really difficult for me to just let go and enjoy myself.

You will encounter some interesting characters. And I am not talking about Mickey & Donald! On the bus trip to the 5K on Thursday, we sat behind the grown version of the redheaded “appearently”. You know the kid I am talking about. The cute kid who had appearently never been on live television before and his grampa makes him watch the Powerball! This individual talked about everything at Disney in a span of 40 minutes in the exact same speech pattern as the kids. Apparently they are related! The next human to catch my eye was the middle school girl who shuffled the entire race while texting on her Samsung Galaxy. I passed her at the 3 mile mark and then again after I made a pit stop. She was shuffling both times. I saw her finish… She was still shuffling and texting. Maybe she was reading from her Kindle app. The event makes for great people watching.

Go see Atlantis at Kennedy Space Center! This has nothing to do with the Dopey Challenge but everyone should see her! They should visit, see Atlantis and then write a letter to their congress person to fund human space flight more robustly! I think if Walt Disney could visit us in 2016, he would be frustrated with the level of progress we have made since the 1960s. I think he would want The Walt Disney Company to help fund human space flight. Can you imagine the push to Mars if space flight was as popular as Walt Disney World! The Disney magic is fueled by innovation.

To conclude, just remember to have fun if you find yourself running the Dopey Challenge, enjoy the ride! You will meet many interesting and creative people who may or may not have ever run before. But more important, it is our job as adults to inspire the next Walt Disney or Werner Von Braun so we can get the heck off this rock and go to Mars in the not so distant future.