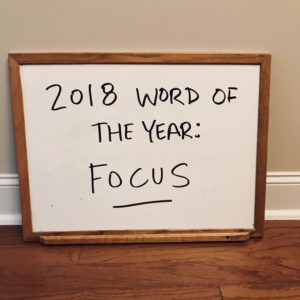 I have had the opportunity to meet some pretty incredible people in my life. I’ve meet Senate Majority Leaders, Grammy winners,  Astronauts, Gold Medal Olympians, National Teachers of the Year and more… To achieve at the highest level, you must have unwavering focus. Most often you must sacrifice instant gratification for long term achievement.

A perfect example of this is astronaut Dr. Story Musgrave who holds a six pack of academic degrees. Story grew up on a farm, served as a military flight technician in the Korean War, worked as mathematician, earned his M.D., selected to be an astronaut during the Apollo program, flew on six Space Shuttle missions (having waited 26 years after becoming an astronaut) and worked for Disney as an Imagineer. I’ve heard Story described as someone who could do multiple tasks while playing chess and attempting to solve all the world’s problems… while flirting with a pretty girl.

Someone with that kind of brain power has to discipline themselves with focus… laser precision, come hell or high water, leave no man behind, gazelle like intensity focus. This would not describe me. I am laser focused on two things, BEER & PIZZA. I speak the truth. I do have focus on other tasks. However, the sure way to get me to laser intense in 1.67 seconds: simply tell me I can’t do something. I had a college professor tell me because I had a learning disability I could never been an educator. She was wrong. It takes focus to overcome poor spelling!

Another human in my life with laser intense focus is my triathlon buddy. She was a college athlete, turned Space Camp counselor, an outstanding classroom teacher, transcontinental cyclist, Boston Marathon qualifier, world traveler and four time top ten age group finisher in Ironman triathlons. Recently, I have described her as someone who doesn’t downsize her dreams. She has focus, serious, laser beam, focus! Accomplishing so much before the age of 31 takes focus!

I want, this is the type of focus . This fall while running the back roads of Madison County, Mississippi, I came to the realization that mentally I am the best version of myself while swimming, running or biking. I simply can’t focus on more than two things at one time. I am not the best version of me when multi-tasking. Maybe I was at one time, but not now.

In 2018, I will embark on a new adventure for me. I will spend more time with my family, tackle a few bucket list items and try to work on my focus. Since running the back roads of Mississippi I have attempted to meditate daily, learn a new language (Hablo un poco de español.) and working on my overall focus. Therefore, my word for 2018 will be FOCUS! In 2018, I will work on my focus in everything I do. Focus on my relationships, athletic endeavors, family matters and more… Focusing on keeping my blog post more regular is on the to do list!

This entry was posted in Etc. and tagged 2018, Astronauts, Focus, Ironman, Mississippi, Spanish. Bookmark the permalink.