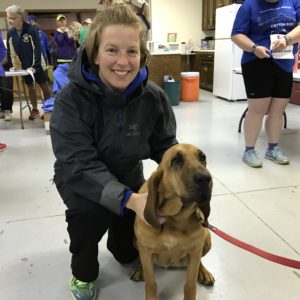 Don’t let a story of a cute hound dog fool you, the Hound Dog Half Marathon is a tough race. To be fair, the half marathon course is more down hill than up hill. The course is adorned with beautiful hillsides, charming goat farms and friendly volunteers. The hard part of the course is the last five miles, straight up hill on a gravel trail that once was home to the Tennessee & Alabama Central Railroad. That was before the Civil War and before a the hound Ludivine ran the course and the story went viral.

The Hound Dog Half was renamed after last year’s race. Ludivine scampered out of her yard and joined the first running of the Elkmont 1/2 Marathon. The story made national news and put the small race on the map. Saturday morning the small townhall had a line of crazed runners out the door for packet pick-up. Ludivine greeted the runners. I was lucky enough to get a photo with the famous K-9. Ludivine was there for the start of the 13.1 mile race. However, she wouldn’t run this year.

At the start of the race, Ludivine howled and moaned in sadness as the hundreds of runners started the rainy adventure. Poor dog! The runners started to chant, “let her run, let her run”. She is just a country dog, but now Ludivine is priceless to the community of Elkmont. No one would want to see the hound dog hurt. It was still sad to see her not run.

The first mile the course passes an old cotton gin. Perfect small town race. This year, I noticed the community had added permanent road signs to mark the entire course and each mile was marked by a cute dog house sign. Super classy for a second year race! Even the Limestone County Sheriff’s Deputy protected the runners from a blonde golden retriever mix. Unlike Ludivine this dog didn’t like running.

Up and down we ran as the rain fell on us. I still made friends and chatted with people along the way despite the hilly terrain and dreary conditions. A covered bridge, an old church and all the wildlife and farm animals along the way made for a great but challenging run. A blood hound made this race famous, but the community made it first class. After I finished, I had a great bowl of chicken stew and chatted with the wonderful people of Elkmont. If you get a chance to run this charming course, please do… It is tough, but run it for the community of Elkmont.

This entry was posted in Races/Events and tagged blood hound, half marathon, Running. Bookmark the permalink.