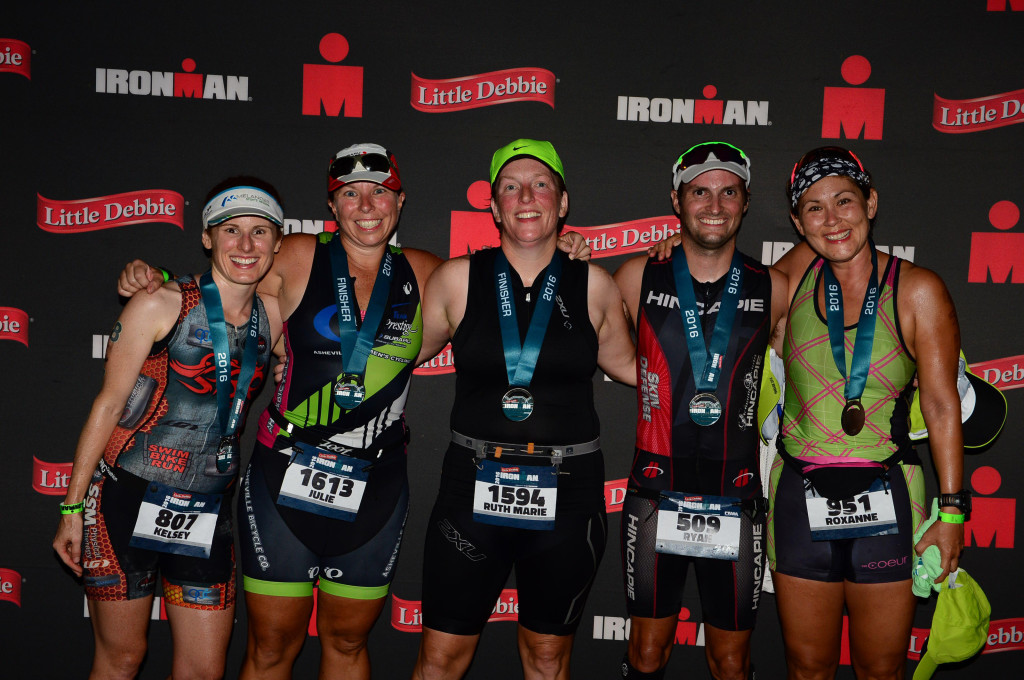 At first, when sitting down to write my obligatory race report, I couldn’t put words down on paper. I was not only physically exhausted but mentally exhausted. The whole year leading up to Ironman Chattanooga was an exercise of endurance, resiliency and grit. After crossing the finish line, I didn’t have anymore to give. Training wasn’t always the priority in a year of family emergencies, revitalizing a camp, moving a bale of cotton to Mississippi, along with all the other things life brings in a given calendar year. But just like running an Ironman triathlon, you have to take one challenge, one hurdle or one difficulty at a time. So lets talk triathlon now.

Pre Race
I woke up much earlier than I had for other line-up starts. Typically, I like to be at the back of a swim line to stay out of traffic. But I felt like I would need every minute to finish this triathlon. I also wanted to enjoy as much of the early morning temperatures on the bike. The forecasters had predicted a high of 95 degrees for the day. I found my spot in line at 5 AM and camped out for the next 2:30 hours with Roxanne, a triathlete from California with Alabama roots. Nerves didn’t hit me until I heard the pros start the race. At that point, I hoped and prayed I could make it to the finish line later in the evening.

Swim
Not much to say about the swim. The water was 83 degrees and I felt very sorry for swimmers who chose to swim in wetsuits. I know the benefits of wearing a wetsuit, but the heat would be a factor all day long. As I entered the water, wanted to get away from the bank and near the center of the river, but I felt like I over shot that goal. For the first half of the swim, I felt like I had set myself up poorly. I refocused and started spotting on a large white boat near the shoreline. Once I saw the bridges, I felt like I was home free. Those bridges, whether running over or swimming under, they are a welcome site. I popped out of the swim with a 1:08 time. I knew the easiest part of my day was over and I needed to shift my mental focus from an easy river swim to a long bike ride through Georgia.

Bike
The plan was to not push too hard on the bike. I had a pace set in my mind that could get me safely into T2 before the cut off time of 6:00 PM. My training wasn’t the best for this event and I was especially weak on the bike. For all practical purposes, I took two months off during the summer while working at Camp Cha La Kee. However, I feel certain that unloading, building & rebuilding bunk beds could count as endurance training. No matter what, I was on the bike and as I crossed into Georgia the reality was slow and steady finishes the race.

The first loop was somewhat pleasant and enjoyable. I was happy with the partial shade and cooler temperatures on most of the first 40 miles. My plan of an early start was working as I kept moving forward. Around mile 25, an athlete passed me who I clearly seemed to not be paying attention. I slowed my cadence and watched him carefully as I distance my self from him. I thought to myself, “he is going to cause an accident”. Roughly 30 seconds later, there were four cyclists caught in his cone of chaos. Everyone was OK, but water bottles, bikes, nutrition and people were scattered along the road. I stopped and did all I could to help the riders and clear the path. I wasn’t stopped long.

The second loop was much hotter than the first. The temperature hit a high of 97 during the last half of the 116 miles. The pavement felt like a hot skillet radiating heat. I had never done a triathlon or any endurance race in 90+ degree weather. Because of the extreme heat, I questioned, what did a DNF look like or feel like mentally and physically? If you can identify the monster it is easier to stay away from the monster. I decided to create rules for myself. If I couldn’t do simple math or if I started vomiting from the heat, I would stop. With these simple rules, I kept moving forward.

As my legs keep churning forward, up and down the rolling hills, I remembered details from 2014’s IM Chattanooga, I remember talking to many cyclist during the ride, but not this year. To survive the heat, everyone had focused intensity that would rival hardened professional triathletes. My focus had to be on the finish line and nothing else. As Admiral Wm. McRaven advises, “Never Ring the Bell”, never quit. As aid the aid station near mile 95 past I remember, I hadn’t had a pee break since the bushes right before swim  start. I started  to drink more fluids worried that dehydration would get the best of me. I drank more and peddled as hard as I could. My bike and I returned to T2 just before 4:00 PM. Plenty of cushion between me and the bike cut off time.

Run
I felt OK as I transitioned from cycling to running. Only trouble I had in T2 was my socks. I love Feetures, but the kind volunteer helping me didn’t know there was a left sock and a right sock. We looked for the left sock for a bit before finding it in her hand. No worries! I managed to get my socks & shoes on my feet and none of it involved simple math. I could hear the sweet sound of cowbells as I started the run.

My plan to take in more water on the last part of the bike backfired. I had too much liquid sitting on my stomach, which caused my stomach to hurt. I longed to vomit or burp. So I walked… A lot! I had lots of day light left and plenty of time before midnight. I walked most of the first loop. I didn’t take in many fluids, but I did do everything I could to cool my body. Which I think worked. I felt better with each step. The first lap would be recovery.

I crossed the walking bridge headed for my second lap when I started chatting with a local athlete about various things. Ryan was a veteran of many Ironman competitions and a trail runner. He had run in many of Huntsville’s races, including Mountain Mist. We started running together and shortly there after we passed my swim line buddy, Roxanne. Roxanne was running with Julie since somewhere on the first loop. We traded greetings and a commitment to run together. Thus the “Super Pack” was formed on the outbound portion of the second loop. We picked up Kelsey and Bob at some point along the way. Roxanne would check on each of us like a mother hen or protective mother. We all ran better and kept each other moving forward. We traded nutrition, war stories and concern for one another. We formed our own little triathlon family. The best part was when we made it to the North Shore section where the neighborhood spectators cheered for our commitment to team! “Hey, look at them… they are sticking together”!

I couldn’t leave my group. Not even when I saw Coach Dana! I had wanted to see her all day long. But my commitment to my comrades was greater than my desire to chat. Honestly, if it hadn’t been for Dana committing to help coach me in the eleventh hour of training, I wouldn’t have made it to the start line or to the second lap of the run. Life, like triathlon, is about your support system! Friends, family and other relationships that are formed along the way is the purpose of life and give life meaning and value. Without a support team in our lives to give us strength when we are weak, we can’t make it to the finish line. Being apart of the Super Pack was going to get me to the finish line. We wouldn’t leave each other.

Finish
The Super Pack finished! It was a sweet finish. My original triathlon goal was to do an Ironman triathlon before I turned 40 years old. I have now finished two on the course in Chattanooga. Reflecting after my first, I was happy to have completed it in a great time. Time wasn’t important to me this year. The people along the way were what mattered. My nephew Rhett’s road to recovery, the campers and staff at Cha La Kee, and even the people I lost contact with during the year are more important than the finish itself. Chris asked if I like running across the walking bridge on the first loop or the second loop. I immediately said the second loop, because I am closer to the finish. He really was asking about the view, the scenery along the river comparing the daylight and the darkness. Both can be an analogy for life or even a topic for another blog post.

The second finish at IM Chattanooga was so much sweeter because of what I had experienced along the way. Like I said, time wasn’t important. I am extremely ok with a finish of 14:28:07 on a 97 degree day when only 1651 athletes finished. I am a much different person, triathlete, friend, and human than my first 144.6 finish. The first IM was truly about achieving it as single goal. My 2016 finish was about the journey itself. You have heard of people cramming for a final exam, but what about cramming for an Ironman. Should I have trained differently, yes. Would I change it, no. I learned a lot in 9 1/2 weeks I did train. I have heard Ironman described as learning to make 10,000 decisions in one day. Learning to live with your decisions and the mistakes along the way. I am a better person because of the people I have surrounded myself with, the decisions I make, and learning to keep moving forward no matter what!