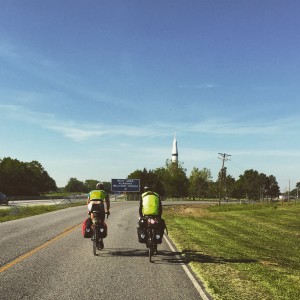 My triathlon season will start in two weeks in Chattanooga, where last season ended.  Seems like many years not just seven months ago, so much has happened and so many stories along the way.  I had every intention of writing more in 2015, but didn’t.  My goal was to try to refocus my blog – I do have a new look. In April, during Oak Barrel Half Marathon in Lynchburg, TN I ran behind a man who had phatboyrunning.com stenciled his shirt tail. As a passed him, I told him I had been looking at his butt and wanted to read his blog.  After returning home and reading Phat Boy’s blog, I was jealous of the drive and commitment of others. I have goals, but sometimes I don’t communicate them nor do I share with others.

Yesterday, I ventured to Elkmont, AL for the Spring Krusher Ride.  The ride began at eight o’clock in the morning at the local high school and I rode the first 25 miles with friends and then the last 38 solo.  I tried to keep up with a nice lady named Geri, however I wasn’t able to keep up.  I am simply not in shape.  I struggled.  I have run 2 half marathons, a Ragnar Trail and a traditional Ragnar Relay, but I haven’t spent much time on the bike.  That is my fault.  Beyond not being ready, I had a fantastic time riding.

Rides in north Alabama are so much fun!  You meet so many wonderful people along the way, as well as seeing God’s wonderful creation.  There was a hillside with cattle grazing which appeared to be straight from the children’s book, The Story of Ferdinand.  I also peddled through the charming town of Prospect, TN. Which seemed like a perfect town to quit in, but I didn’t!  I trudged on and did complete the 63 mile ride.  Later in the day, I got a speeding ticket – not on the bike.  Sometimes on a glorious day in Alabama you forget where you are and what the speed limit is.

No matter what, each day that ticks away brings me closer to my fourth Half Ironman.  On the start line in Chattanooga, I will be wearing bib 761. Born in 1976 and I only get 1 chance at this life.  A larger more important goal in my life is to make a meaningful impact on the world around me.  Each day that ticks by, I lose a chance at that goal.  Time to buckle down, I am almost 40… Shocking!

This entry was posted in Adventures and tagged Chattanooga, Ironman, Triathlon. Bookmark the permalink.