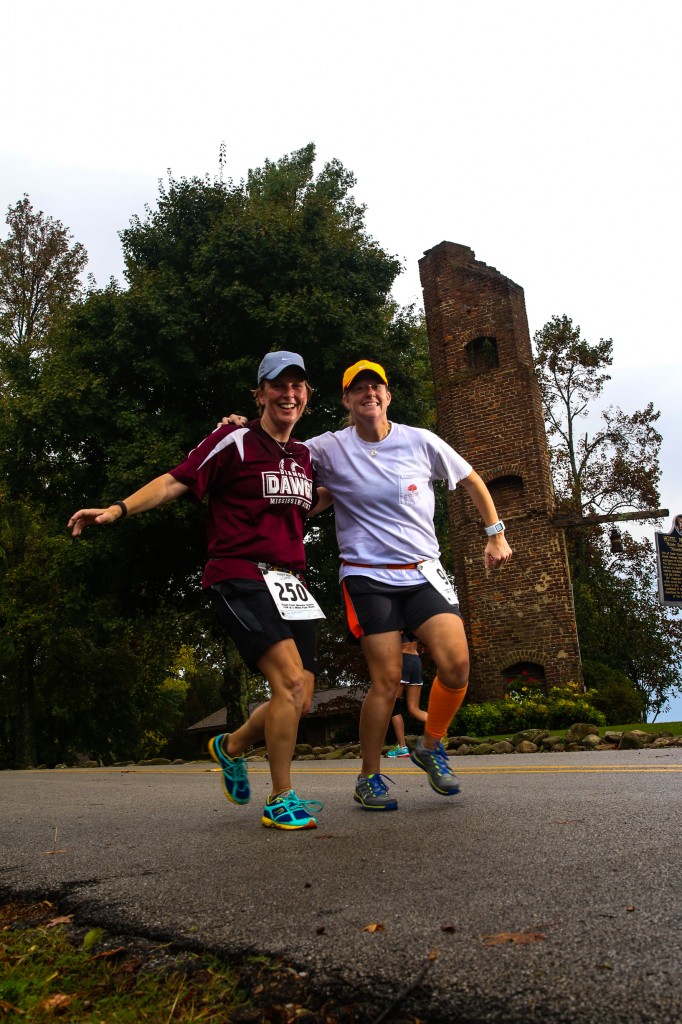 Have you ever wanted to be a super hero?  Well, I have!  Unfortunately, if asked for super powers, I would ask to spell every word correctly and run a six minute marathon pace.  These are my choices because I can’t spell and only molasses in Juno, Alaska is slower than me.  Tonight, I won’t talk about the words I can’t spell.  I will talk about my four favorite races that didn’t envolve other people, swimming or biking.  Here are my Mount Rushmore of races!

Scenic City Half Marathon in February was my first run of 2014.  This Chattanooga run laid the foundation for my whole season.  I am a multi-sport athlete, therefore I like events which give me some other variable than just sneakers on pavement.  In 2013, Scenic City was my first half marathon.  I ran the course in 2:25:02 which was epic for a slow fat, pasty white kid.  I ended 2013 with a trip to Baku, the flu and a long Christmas season.  February came early this year and so did my first road race of the season… Scenic City.  It was not pretty, but I ran the course in 2:24:05, a course PR and a shot of confidence for Ironman Chattanooga which would run some of the same streets and highways.  I love Chattanooga!  How could I not pick this race for my Mount Rushmore.

Cotton Row 10K on Memorial Day in Huntsville is a treat for any distant runner in the Tennessee Valley.  I finally got the guts to run the 10K version of Cotton Row.  I simply love saying I ran Cotton Row since I have a full size bale of cotton sitting in the front room of my home.  There is a little hill you must run up along the 10K version of Cotton Row that could be intimidating for most… it intimidated the crap out of me!  I enjoyed Cotton Row and recorded a 1:06:51 time, however, I hadn’t really started training in 2014 yet! Vic Balch kicked my ass in 2014… I am looking forward to 2015!

This spot was a toss up between the Liz Hurley 5K Ribbon Run and the Monte Sano 15K which are both Huntsville Track Club races.  The winner was, Monte Sano!  The winner was the 15K!  Monte Sano is my favorite place to run!  This year I have had dozens of training runs atop of Monte Sano.  This 15K was my first long run after Ironman Chattanooga and it was on the same day as the MSU vs. Auburn football game.  I ran this race with my Auburn friend Jen DiCarlo.  She wore Auburn attire and I had on maroon & white! How could a little 5K top this unique and special race.  Heck, I got an awesome photo along the 15K course which I finished in 1:44:48.  It was a great day and a fun race. (Photo credit We Run Huntsville)

Last, but certainly not least would be my most recent race, the new and improved, Rocket City Marathon.  I ran this race with Jen DiCarlo in 4:58:20.  This race is a taste of Huntsville, Alabama.  The new Rocket City Marathon course shows off the U.S. Space & Rocket Center and the majestic Saturn V.  I felt, honored to help in the process, volunteer during packet stuffing, and then ran the 26.2 mile course! I look forward to running this course again in the future, but next year, I promised Shaggy he could run RCM and I would help at the Rocket Center!  Big thanks to Shaggy, Katie and Will for watching over the logisitics so I could run this race!

After all the miles, this year was a good year for running, but running really does suck!