Home for the Big Games 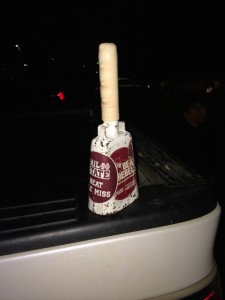 Last year I was not in Starkville, Mississippi for the Egg Bowl and wasn’t watching the Iron Bowl on my couch in Huntsville, Alabama.  I was in Baku, Azerbaijan with a nasty sinus infection.  In recent years, I have lived vicariously through the successes of both Alabama and Auburn nationally as I cheered proudly for the Bulldogs to win all they can each year but most importantly to beat “the school up north”.  Today, I will be watching both games in the same time zone as the games are being played.  But first, I wanted to reflect just a bit on where I was last year when Bo Wallace fumbled and the famous Kick Six happened.

First, it was Thanksgiving Day in the United States and Egg Bowl day in Mississippi.  I was ten hours ahead of Mississippi time and watching the game on my iPad with help of an app called Hide My Ass.  I traveled to Baku with my cow bell but mine wasn’t the important bell. My nephew Rhett’s cow bell has never seen Ole Miss beat Mississippi State.  Each and every Egg Bowl where Rhett and his cow bell have attended, the Bulldogs have won!  I have included the photo which was texted to me by Walt after last year’s game.  I was tucked away in my room at the Excelsior Hotel when the game was winding down and headed into overtime.  I felt like State would lose in OT.  I am sure the final play was over minutes before I saw it in Baku, however as soon as I saw Bo Wallace fumble the football, I grabbed my cow bell and ran around my room and down the hall of the 5 Star hotel ringing it loudly.  I could feel the victory on the other side of the planet!  Too bad the bar was closed, I would have bought the house a round!  They wouldn’t have a chance to kick me out of the hotel, because I moved to another hotel the very next morning.

Two days after Thanksgiving the Iron Bowl was held on the campus of Auburn University.  Again I was watching the game with help from technology to hide my IP address.  It was more difficult with my step down in hotels and I kept falling asleep. Each time I would wake up to check the game, Auburn was losing.  Finally, I turned off the live streaming feeling as if Auburn’s luck ran out after their Hail Mary pass against Georgia the week before.  I rolled over in my bed knowing that Alabama would win and eventually play for the National Championship.  The football gods had a different plan.  Anything can happen during an Iron Bowl with time still on the clock.  With one second left to play, the improbable happened when a missed field goal was returned by Chris Davis for a touchdown.  While Auburn fans and students flooded the field in Auburn my phone erupted in Baku with text messages and FaceTime calls from the friends.  I heard form people who I didn’t speak to on a regular basis when I was in the states much less while I was in Azerbaijan.  I didn’t even know what had happened except Auburn had won!  I quickly went to YouTube where within minutes Vern & Gary’s call had been uploaded.  I watched in astonishment as Nick Sabam and Alabama didn’t really know what had happened either!  Auburn was headed to the SEC Championship and eventually a face off with Florida State.

WOW! Two great endings to a game within two days of each other and I was around the world to experience it all.  Today, I have heard the ESPN Game Day crew, as well as Tim Tebow & the SEC Nation crew say “where were you when…”, I was in Baku!  I wouldn’t change that at all.  However, being away last year has made me more thankful for being at home today.  This year MSU is in the mix of a playoff berth but we will need a win today in Oxford and some help from Auburn.  Today, I don’t have to live vicariously through an Alabama football team or the internet.  I am home to watch the drama unfold on live HDTV.  I love SEC football and no matter what happens, I am proud of the Bulldogs!  Hail State & War Eagle!

And just for kicks… Go Gators!