I am going to try for a light hearted blog post today, because if I start listing off all the truly wonderful people and things I have in my life back home in Mississippi and Alabama I may just walk into traffic.  This is the first time I have spent a major holiday away from my family.  And if you know me, family means an awful lot to me.

Last year my Thanksgiving blog post list thirty things I was thankful for.  Similar to what everyone has been doing on Facebook day by day.  I am going to list ten things I am thankful for associated with my trip to Baku! 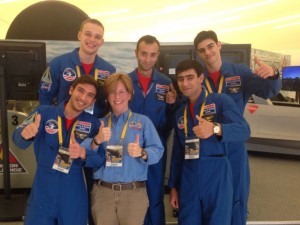 Not Being Detained – For those who do not know, I aways carry a knife.  Most of the time it is in a bag or tucked inside a pocket.  The Sunday morning after arriving in Baku, I discovered I’d traveled on an airplane from Huntsville, Alabama to Baku Azerbaijan with my orange handled Spyderco rescue knife.  Since September 11th knives have been banned because of security measures by the TSA and FAA for airline flights.  I went through security checkpoints with x-ray scans of my carry on luggage in the United States and in Germany.  Obviously this was an oversight on my part by packing the knife and a security oversight by them for letting me keep the darn thing.

Red Bull is an International Drink – Two years ago I never drank energy drinks.  After making a few long distance trips in the same week I started drinking Red Bull.  Darryl, the meteor guy, bought me a Red Bull at the local market.  One Red Bull after another helped to keep me going after long days with limited sleep.  Red Bull’s country of origin is Thailand and is sold by an Austrian company.  Over 5 billion cans are sold world wide each year.  With Red Bull’s stake in media advertising and sponsorships of extreme sports, auto racing and air racing, I have heard comparisons made between Red Bull’s founder Dietrich Mateschitz and the Dos Equis brand character, “Most Interesting Man in the World”. .  I am simply happy I can find Red Bull almost anywhere in Baku.  And I wouldn’t trade the long hours of work… it has been a great experience.

Space Camp Family – Trish, Ed, Mike, Roger, Carolyn, Cowan, Michael, Nathan, Daniel and even Joel have made this trip wonderful.  So often when you work doing the same thing in an organization you forget about the other people working around you in other departments.  This project has been rewarding just for that reason.  However, each day Trish does something crazy to make me giggle, laugh or just fall on the floor in hysterics!  She is a great travel buddy especially to this region of the world.  She spent time in Georgia teaching last year.

The Underground Tunnel to Work – Since the hotel fired George, our most favorite driver, and the new driver doesn’t know how to drive, Trish and I have been walking to work.  We are staying in a hotel just across the street from the venue, however you dare not try crossing the street.  The drivers in Baku are on a mission from God to control the population in Azerbaijan.  They do not stop for anyone or anything. The traffic in general is chaotic at best!  They do not have traffic lights and you are twice as likely to being hit by a car if you cross the street in an area designated for pedestrian traffic.  This underground tunnel has saved our lives countless times!  It is somewhat out of the way, but it is tunnel or death by Mercedes-Benz.  We could take some time off our walk if we crossed the Kentucky Bluegrass which surrounds the venue, but we fear snipers would gun us down.  They are serious about turf management here!

Being a Farm Kid – There have been many things I have done while setting up the exhibit that I had limited experience doing.  But in the words of Story Musgrave, they picked me because I was a farm kid to fix it… He fixed the Hubble Space Telescope and peoples bodies.  I have fixed  electrical gear, used a table saw, constructed barriers around artifacts and undressed a Russian Cosmonaut mannequin.  Being a farm kid and seeing my mom and dad work with their hands taught me a lot. I love working with my hands.  I have loved building things and seeing this exhibit take shape.  I saw chaos turn to order in a few weeks time!

Overall, I have a lot to be thankful for! I thankful for being an American and the wonderful life I have.  I miss my family and friends, however, it is an adventure, and life is about adventures.  The thing I miss most about not being at home in Carroll County is the smell of the turkey coming out of the oven at 6am and the whole family standing around the chop block making the dressing.  I will have to wait a few weeks for that tradition!