First, I am having a ball in Baku! Sleeping in late and going to spa are some of my favorite things about my adventure to Azerbaijan.  Most mornings starts with room service and then I go sightseeing… Who am I kidding!  It has been hard work, but very rewarding.  I have made friends with people from Huntsville, Turkey and locals here in Baku.  For those who do not know, I am here with an exhibit from the U.S. Space & Rocket Center.  It is an amazing exhibition in a wonderful venue Heydar Aliyev Center.

I know I made a commitment to write twice a week.  Well, lets make that an average of twice a week.  Last week was very busy.  We worked twelve plus hour days and sleep was precious.  The only time we sacrificed sleep was to send off our Huntsville friends. When Trish and I arrived the project was already behind schedule.  Everyone was giving the extra effort to make sure things where ready.  The first to leave Baku was Daniel, Nathan and Michael.  Michael couldn’t stay very long in Baku, he was expecting his second child any day.  The next to leave was Carolyn, Cowan, and Joel.  Joel doesn’t work at the Rocket Center, but he sure has a special place in his heart for the USSRC.  He stayed ten extra days to help pull off the feat! Each day since he left, Trish and I have tried to find our inter Joel.  Then waiting until the last possible minute to finish things was Roger, Mike and Ed.  Ed left for Huntsville the day after his birthday.  He missed having the longest birthday every.

Everyone worked super hard. Early on before I arrived Michael rallied the local workers, while Nathan defied gravity by hoisting tons of equipment and displays from the ground floor to our second and third floor nest. It has to be an eagles nest, because we have the Apollo 11 astronauts hand cast on exhibition.  Roger worked on the sims, while Cowan built MIR and all the other giant displays.  I loved Roger before, but I now have a huge place in my heart for him and Cowan.  Carolyn did all things related to the artifacts and kept Ed happy.  Ed made sure everything was precisely placed and all the many items were on display. Mike had to be Mike, plus he had to help build, answer questions from everyone and make sure we behaved!

We were a happy family.  Now it is just Trish and me from Huntsville and Echo from Turkey.  He has a real name, but since I am writing commando, why bother trying to spell it.  Yesterday, we left work after the venue closed.  We walked back to the hotel and crashed for double digit hours of sleep. We walked because George, our shuttle driver, took vacation and the other driver had only been driving for fifteen minutes.  We got lost multiple times on the morning drive and had to teach the new driver how manual transmission works.  Closest to death I have been in a long time.  George will be back on Thursday, which will be perfect since it is Thanksgiving!!!

This will be only the second Thanksgiving I have not spend in Carroll County, Mississippi. The only other time was with my two aunts and grandmother in Indianapolis when I was senior in high school.  Trish and I have decided to have dinner with Echo on Thursday night after work.  Echo has been looking for us a Turkey with no luck!  However, we will have Turkish food on Thanksgiving.  Echo is from Turkey so it all makes sense.  I will miss my family and being in Carroll County.  But I still have a lot to be thankful for!  This experience is one of them.  It has been crazy, but very fruitful. 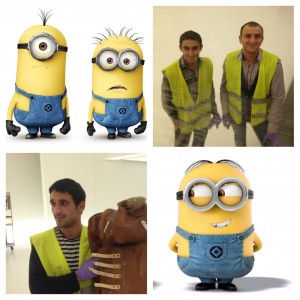 It took over three weeks to complete the set up of the exhibition.  While all those hours seemed difficult at the time, one of the things that made it so rewarding was working with the locals.  They have the biggest of hearts.  I mean this with no disrespect, but they are a lot like the Minions from Despicable Me.  They talk in a language I can not understand, they are the hardest working people ever, and all they want to do is make us happy.  The similarity was sealed for me when I realized the yellow vest they wore made them look like the Minions.  Jimmy is my favorite.  Oxran Cavadli is Jimmy’s real name but he really likes when we call him Jimmy.  He and I bonded over our iPhones.  He thought I had a 5S, which would have made me cooler than reindeer nuts. But nope, we both have iPhone 5’s.  Now, we both have translation apps on our phones.

Now matter what, we all worked together as one big family.  No, we are not trying to steal the moon.  Just inspire kids and adults to travel there someday soon.  We are all like minions trying to fulfill JFK’s vision again fifty years after his death.  It has been a good week and a half.  Hopefully there will be more blog post! Good night, good morning, or good afternoon whichever time zone you may be reading from.