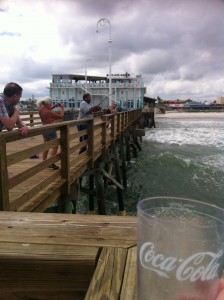 I guess I don’t get out much and that is why I don’t blog much anymore.  I can’t help but want to share this wonderful fishing story with you.  I hope you enjoy it.  One thing I ask you, please read this post as if you were whispering to yourself.

I found myself in Daytona Beach, Florida with Jitters and Baywatch recruiting students at Embry Riddle Aeronautical University to work at Space Camp. We ate lunch at Ocean Deck restaurant just off the beach here in Daytona.  Today the Thunderbirds were practicing for their air show this weekend.  Being Aviation Challenge staffers once upon a time, we had to hit the beach to watch their aerial assault verses the seagulls.  It was amazing!!! Only thing better was watching F-16s landing at Luke AFB a few years back.

We walked down to the pier where Joe’s Crab Shack is located.  We wanted to walk all the way to the end of the pier to see the wonderful waves crashing into the shoreline.  There was a fisherman with a lady fishing toward the end of the peer.  We noticed the lady first, because she was wearing a hot pink bikini top with jean shorts.  I knew I was in Florida when I saw the jean shorts.  All of a sudden, the fisherman yells, “I have caught one!”  The lady comes running to help.  I am captured by the drama unfolding. We are excited, because we are about to see a giant fish leap from the water.  The man is wrestling with the rod and reel.  A crowd of bystanders start to form around the fisherman when the lady goes to retrieve her matching hot pink camera.

The lady comes over to her fishing buddy ready to take a photo of this tireless fish that must be extremely large.  The struggle for the fish had taken almost five or so minutes.  I survey the water below in hopes to catch a glimpse of this mammoth creature.  I see the line and the beast that has been caught by the heroic fisherman is none other than an elusive blue cable.  Yes, a blue cable/rope tied to the pier with a net attached to keep the day’s catch fresh while the fisherman was fishing. Yes, the fisherman had caught his own equipment from the opposite side of the pier.  The reason this elusive blue cable was putting up such a fight was because there was a gallon milk jug tied to the rope as a weight.

The fisherman continued to fight with his line.  All I could do was look at Jitters and Baywatch and say, “would you just look at that!”  We walked away, into the sunset, never to be seen again.