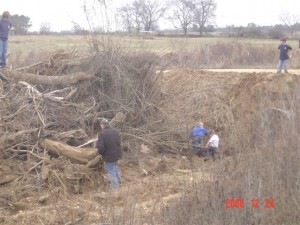 In 2006, two days before Christmas Chris and I arrived at my parent’s house in Mississippi with our little dog Boo.  I had just walked in the door and sat down at my father’s desk when I got a phone call from my brother asking me to meet him at the canal bridge. Chris and I met Walt and his whole family at the bridge near US 51 Highway.  Some despicable human being had released twenty to thirty domestic rabbits to fend for themselves because that despicable human being didn’t want to care for the rabbits any longer. The rabbit chase began!

We chased the little critters around the thicket, inside the briers and in the cow pasture. Some predators had already feasted on a few rabbits. There were a few brown rabbits but the majority where common white rabbits with pink eyes. The white rabbits were the easiest to capture. Boo even helped to flush the rabbits from the thicket and help in the grand chase for the rabbits. Once we captured the little guys and gals we placed them in a dog kennel in the back of Walt’s truck. As the end of the chase, we had captured seventeen rabbits all white.

What do you do with seventeen rabbits after rescuing them from being a coyote’s breakfast, lunch and dinner. You give some away, you take one home to Huntsville and you keep a few on the farm. The one we took home to Huntsville was later named George. A very predictable name for a rabbit that would be loved for many years to come. George became our family pet just like a dog or cat would. For the first few months after George arrived in Huntsville, my parents would ask, “Do you still have that rabbit.” The answer was yes, but for a rabbit who was rescued off the side of a dirt road it was a little shocking he was still hanging around. 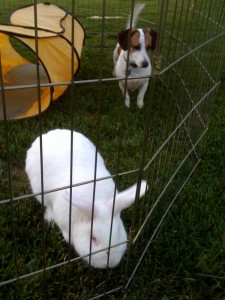 George was not just any rabbit. George was a twelve pound Monty Python rabbit. If Chuck Norris had a rabbit, it would be George. George once drop kicked our Jack Russell, Boo, and was known to bark at our neighbor’s dog. He spent many a nights indoors because of the cold. George loved the power outage that followed the April 2011 tornados, because he had so much company in the back yard. We camped out, we had a camp stew cook out, and a nightly bond fire. George was at his happiest!

Who could have imaged a thrown away rabbit having such a good life. He was fed and fed well. I would proclaim in his first year of living in Alabama that he is more expensive than a dog. He had a wooden hutch on the patio and a rabbit run under the trees in the back yard. He was a handsome rabbit too. He would have wild rabbit girl friends hop through the yard on occasion. He was a good rabbit!

Sadly this morning we put the aging hare down. Yes, he died just as Michael Jackson did, an overdoes of anesthesia. Our vet was very kind and loved the story of George. Looking back at his life, he was larger than life. He was also a large rabbit, only two pounds smaller than our dog. He was treated like a king and he gave us a lot of happiness. And just like the kings and monarchs of old he was given a royal burial in an undisclosed location. Long live King George I!