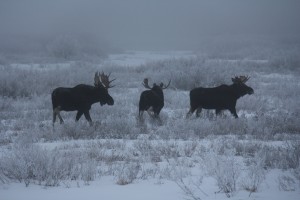 Yes, that is a popular Ben & Jerry’s ice cream. But today it means the obvious, moose tracks. This morning I woke up to a large ruckus outside my room. Rhett, Reece, and Lucy were playing loudly at 6:32 am Mountain Standard Time. The goal for today was snowmobiling. The early start was to get the sleds from West Yellowstone and back to the cabin so we could explore the great outdoors around our cabin. The first group left for the snowmobile dealer promptly at 7:15, upon return they reported the siting of moose, BIG MOOSE!

Once we all arrived back with six snowmobiles and all the snow gear needed to live in the North Pole, we hit the trails. This might have been the biggest mistake of the day. We just hit the trail. It was like Scarlet O’Hara saying, “I will think about that tomorrow!”  We were like kids on the first snow fall of the winter in Mississippi in ten years. We hit the trail with Rhett, Reece, Lucy, Big Daddy, Walt, Christy, Corey G., Will B., Chris and me. We drove up and down the trails. I flipped the snowmobile twice. Much better than my ski slope record.

The scenery was magnificent. I have said it before, it is a winter wonderland, a place where you know there is a God and he is a mighty God. The best thing about all of this is my family is right here with me. Still, we did leave Big Momma at the house playing Bejeweled but it was all good. As we were zipping up and down the trails, the little kids switched back and forth from snowmobile to snowmobile. Lucy and Reece rode with me most of the day. There was a time I was solo. I am thankful for our guides, Corey and Will B. They led us to a lodge in the middle of nowhere. It was only accessible by snowmobiles and dogsleds. By the way, we did see dogsleds and that would be the only thing cooler than snowmobiling.

We will call the place we stopped “Henry’s Meadow Creek Lodge”. Imagine a biker joint in the middle of the snow, with a gray haired man cooking hamburgers and greasy spoon gourmet food such as a hot burger. A hot burger consisted of a hamburger patty on buttery toast with brown gravy all over it. I felt like I was at Airport Grocery in 1997. I will never find the place again. But Guy Fieri should find this place and put it on Diners, Drive-Ins and Dives. My bacon cheese burger was good!!

After we left Henry’s, we visited Big Spring, a hot spring in Idaho. There were mallard ducks swimming in the spring and moose droppings all around the edge. I know it was moose dropping because I read the book, “Who Pooped in the Park”. Just after we left Big Spring we got lost, really lost. But we saw another moose. Seeing moose makes everything better. We thought that we would be back at the cabin by 2:00 pm, however it was more like 4:00 pm. Somewhere in between two o’clock and four o’clock Lucy passed out. She was like a limp and lifeless sack of noodles, poor girl.

The day did end. It ended with a fantastic spaghetti dinner in the Red Cedar cabin. Life is good. Want to know how I know? I don’t know the day of the week. It is a great day. Even if there is still ruckus going on behind me.

This entry was posted in Adventures. Bookmark the permalink.