Another Year Flies By…

This year has been a blast! This year has been very different from the last thirty something years before.  In an effort to reflect on an amazing year, here are my top ten memories of 2011. And a few honorable mentions.

1. Game Seven of the World Series: One minute you are mopping water in the bubble classroom. Seven hours later, you are with your brother watching the seventh game of the World Series. Yes, it can happen and it did! Game six was postponed because of rain on Wednesday to Thursday night. For baseball people this made for a shift in starting pitchers and line-up changes. For a parent it gave a slim change for a Friday night game seven. To get to a Friday night game seven the Cardinals would have to come back from two deficits to win game six. It was a miraculous series of events but David Freese made it happen. This unforgettable bucket list event made me smile, cheer and even cry! If you ever get a chance to seize the day while mopping the bubble classroom, DO IT!

2. Stupid Irene: I am not going to talk about Hurricane Irene hitting New York City when I should have been watching a Mets game. I am going to tell you about the amazing time I did had touring about NYC, watching a game at Yankee Stadium where three grand slams were hit, visiting the crown of the Statue of Liberty, joining Ann Curry in the plaza to watch Train perform and watching Wicked at the Gershwin Theater. It was such a fun trip. I almost lost Snapper when she came up from the Subway with her mouth wide open. Natives had to tell her to shut her mouth or a Subway rat would run in. The Yankee’s game started out with rain and the Yankees losing! If you ever can visit the crown of the Statue of Liberty, the park rangers treat you like royalty! Unfortunately, stupid Irene ran us off to Alabama to play golf.

3. NFA: Neil Armstrong came to Space Camp to honor Dr. Von T! What a treat for anybody. All the young people at camp that evening lined the walk way underneath the Saturn V rocket to welcome both Neil Armstrong and Dr. von T. It was an amazing testament to the work both men did for the space program. After the evening concluded people mobbed Neil Armstrong and because I had on a blue flight suit, I was lucky enough to serve as Neil Armstrong’s bodyguard. At the end of the night we all adjourned to Otter’s for a beer or three with our friend Hoot Gibson. Neil didn’t join us!

4. Jack Daniels Tour Guide: On the count of three say, WHISKEY! Yes, I was indeed a tour guide at Jack Daniels this summer. One of the best jobs in the world. Got to meet cool people and talk about whiskey. Jack Daniel started making whiskey in the 1800’s and they still make it in Lynchburg, Tennessee today just like Mr. Jack did. I was able to see many things they don’t show you about on the tours. As well as learning a few secrets. I visited the distillery about twenty times before working there. I trained by shadowing fifteen tours. As a tour guide, I gave 94 tours. From all that, I can testify that there are good tourist and there are bad tourist.

5. Picking up the Sticks: I have played golf since I was in high school. However, in recent years I have not been as faithful to the sport. This year, with the aid of my friend Snapper, I got back into golf. It all started by taking Lit’ Snap to the driving range. Then we visited Huntsville Muni followed by many more courses. Our adventures included golfing with Kitten, visiting Oxmoor Valley, a Robert Trent Jones course, and even the back yard.

6. Yellowstone Adventure: It is somewhat difficult to say something about my vacation to West Yellowstone that I haven’t already said. However, I will try. This vacation meant the world to me. I was able to spend time with my family in an almost magical place. That is correct; you don’t have to go to Disney to find magic! Spending precious time with my parents and my brother’s family was so refreshing. Our vacation out west was the most time we had spent together in years! 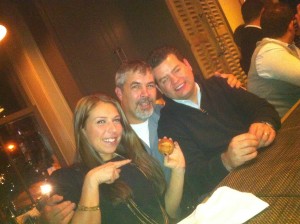 7. Night of the Flying Roll: NatGeo Networks contracted with the USSRC to provide an incentive trip to wine and dine a few advertising executives. Fortunately for me I was able to help the Corporate Camp Manager, Snapper and her cohorts to develop and deliver the program. It was the coolest group project I have ever had the privilege to work. A group of 26 executives trained at Aviation Challenge, at Area 51, in the Space Shuttle simulators and in the Underwater Astronaut Trainer! This project allowed me to SCUBA dive for the first time and more. The final evening the staff was invited to join our guests, NatGeo executives, astronaut Hoot Gibson and the Rocket City Rednecks (RCR) at Cotton Row in downtown Huntsville. It was the best way to cap off a successful event. The RCR crew was so funny! The best part of the evening was when a roll shot across the room breaking the red wine glass of our guests. You correct if you are thinking that, “I bet on of those rednecks tossed the roll.” Yes in deed, they threw a strike! We heard a cry… I meant to hit him… not your wine glass! I should have written a whole blog post on the evening.

8. Disney Cruise: Have you ever wanted to cruise around the Caribbean with Mickey Mouse and his gang. Well, I got the chance to do just that and see one of my best friends get married to a super swell guy! The only downside to cruising around the Caribbean with Mickey and the gang is thousands of children having emotional break downs at 8:35 each evening.

9. Reindeer Wrangler: This year for Christmas the U.S. Space & Rocket Center hosted the prelude to the Galaxy of Lights. Almost one mile of lights in addition to the previous GOL lights which started at the greatest aviation camp in the world, Aviation Challenge. AC played host to two North American Caribou… reindeer. Being a farm girl I jumped at the chance to be the official pooper scooper and reindeer wrangler. I did have some help from Spud, Snapper, Riyeasa, Ham, Matt and Marcia. Thistle and Cindy Lou will be missed when they head back to Rocky Hill Reindeer Farm. 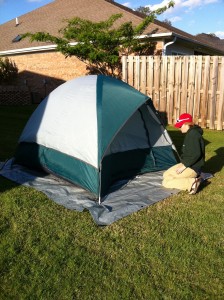 10. Life with No Power: A year end review can’t be complete without weighing the good and the bad. The tornados hit many states including Alabama cutting the main power line which supported most of Madison County. This was a small inconvenience to me and my family, but many families it would hurt. The mighty strength of this series of tornados would be historical in scope. Space Camp completely shut down for four days. I lived in a tent in my back yard with Snapper and Boo. Chris was in Atlanta for most of the time. For me, living in a tent isn’t a bad gig. Each morning we would cook breakfast, listen to the 8:30 press conference to listen for Rusty Russell, and then enjoy our ceremonial 10:30 beer. At some point after our nap, there was scavenging for ice and then wood for the nightly fire. I am thankful to God for my families safety and for my back yard adventure.

This entry was posted in Year End Blog. Bookmark the permalink.

1 Response to Another Year Flies By…