To make a tradition stick forever you must do it year after year. I am not sure if year three of this blog review makes this a tradition. However, let’s still call it my “Traditional Year End Countdown” of all the major moments in my life over this past year. This year Chris went back to work for PricewaterhouseCoopers, I changed jobs and the changed again, I made it to Fourth of July on the farm for the first time in a long time and who could forget all the times I tried to give away my dog, poor Boo. While looking back I realized this year could be known as the STS 131 Year! Let’s take a look at the top ten moments of 2010 for this redhead.

Facts of Life Summer: It was one of those summers that you take the good, you take the bad, and there you have the facts of life! I always loved Jo on that show. I did have a great summer in retrospect; however it was difficult not being around camp programs. Since I was 15 years old, I have spent my summers working with children. In April I left camp operations to be the Director of Education and work with teacher camp.  Leaving that was not easy. However, I learned lots about myself, good and bad. Now that I am back where my heart is happy I just have too work hard and do what I am called for! I loved my job as Director of Education, but helping a kid overcome homesickness is more fun than teaching teachers! Sorry, love you teachers (Rhonda & Veronique). 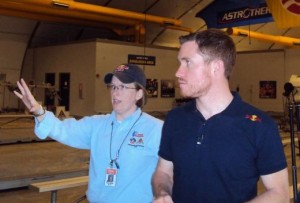 Red Bull Racing: Driving back from the launch of STS 131, I checked my email. NASCAR driver and Red Bull Racing team member, Ryan Vickers was going visit camp the day we returned to work. I felt it was my duty as Red Bull to volunteer my services as tour guide and show our friend around camp. Ryan Vickers is such a nice guy! He was so friendly and nice. He was really interested in space and what we did at camp. The neatest thing I observed while hanging with the NASCAR driver was when I offered him a bottle of water. His assistant took the bottle from my hand, removed the paper label and then handed it to Ryan. It was not a Coke product. He wasn’t in the winner’s circle or on a race track, but the sponsors are still priority.

The iPad Revolution: I know that this may seem silly, but starting the iPad revolution at camp was monumental for me. When I started working nights at Space Camp I saw the value of my iPhone (this too was a great adventure of 2010) when answering questions and concerns by campers and staff. I have had fun teaching Marcia about the power of the iPad. It seems like a magic window that helps me get my work done more easily. With all the apps and multi-tasking tools, emailing, and fun facebooking, the iPad is one of the best and most useful gifts Chris has ever given me. I only wish that Bill Cosby would create a Picture Page app for the iPad! To all my Aerospace iPad friends, let’s have a productive 2011. 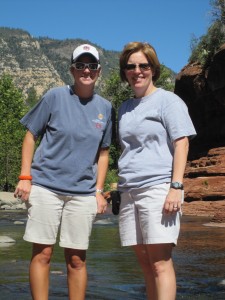 River Adventures: I have recruited for Space Camp at colleges far and wide for four seasons. There are two colleges I look forward to visiting each year, Embry Riddle in Arizona and my school, Delta State in Mississippi. This year our recruiting involved adventures around rivers and creeks. In Arizona, Snapper and I trekked up Oak Creek at Slide Rock where I discovered the meaning of Slide Rock. In Mississippi, I took Snapper to one of my favorite hang outs during college, a sand bar at Rosedale along the mighty Mississippi River. Both of these rivers have come to mean a lot to me. However, the adventures I had on both of them made this year’s recruiting season the most enjoyable on to date!

Yankee Adventure: Chris and I made our second trip to New York City. This time we didn’t just spend a day in the Big Apple. We adventured around the city along with watching three MLB games. Among our stops along the site seeing tour was the U.S.S. Intrepid, Chelsea Market, B&H Photography – the most amazing store in the world, the Top of the Rock, Grand Central Station, and Central Park. The great thing about New York City is that visiting the concrete jungle is totally out of the normal for Chris and me. I would much rather play in the mud or work at Pottery Barn, but visiting America’s welcome center is always a learning experience. Go Yankees!

Christmas Calendar of Awesomeness: If you don’t know me, I haven’t been a fan of Christmas for the last few years. It is a time of travel and in-laws and not much focusing on the greatest of Christmas. Christmas is a time for family and friends to remember the great gift of Christ’s birth. But for many of the past years it has worn away at me. A few years back Snapper promised to help me find the Christmas spirit again. Unfortunately that was the year of mono for her. This year she made good on that promise. She made the Christmas Calendar of Awesomeness. It was simple, each working day she gave me a small happy with a Christmas quote. It made an advent calendar of sorts. It helped me remember the coolness of Christmas. Christmas this year was great for this and many other reasons!

Alex and Luke Visit Camp: When Alex and Luke visited camp I wasn’t their escort that was the job of Charity the social network guru. I met Alex and Luke at the Astronaut luncheon with Bob Springer. Charity had chatted with them about their adventures around North America on their social media directed tour of the greatest country in the world. I gave Alex and Luke something I thought was just a simple happy, a Space Camp coin. Luke mentioned later in a road trip recap video it was one of his favorite tokens. This made me so proud of the work that has been done since Alumni Andi and the Space Camp coin first started. Alex and Luke are great people and I am envious of there road trip… I also wish I could live Red 3’s adventurous life!

STS 131 Trip: In early spring a group of Space Camp staff traveled to Florida for the launch of STS 131. This wasn’t any shuttle launch for Space Camp. Dottie Metcalf-Lindenburger was a Mission Specialist on board and the first Space Camp alumni to travel into space. It was the perfect event! Night launches are the best. Hanging out with co-workers and friends was amazing. The road trip down was a great adventure. And how can we forget Doug Wheelock, “Pig on the right, Shuttle on the left.” Tears and cheers were on the balcony of the OSBII that morning as we saw STS 131 lift off with Dottie and Space Camp riding along!

The 4th HOF Event: This year we had the Hall of Fame that we all wanted and looked for since its inception. Max Q played after dinner under the Saturn V, Hoot Gibson was simply a guest, Dottie joined us for the event, and the whole family seemed to be there. Personally, having Rhonda, Veronique, Snapper, and Safety there, and others who have been there every year, made the HOF very special for me. This year the HOF event was more like a family reunion and less like a production. Thank you, Mike Flachbart! 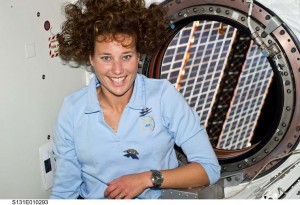 Wings in Space: I think I was taking a shower when I thought about asking Dottie to take along a few Space Camp wings on STS 131. It only seemed fitting that she take along the symbol of a Space Camp graduate along with her. I was so honored that she agreed to take a pair of Space Camp and Space Academy wings. What was even cooler was to discover after the mission Dottie took them out and posed for a family photo onboard the ISS. She and the over 500,000 graduates represented in those wings, floating in space! The day she presented the wings at graduation was one of my proudest moments at camp. The wings currently can be found on the wall of Discovery MOCR on the MCC floor at Space Camp.

All in all this has been an outstanding year! I look forward to 2011 and the many adventures I will go on! I do hope to write more, laugh more, and have more free time… next year.