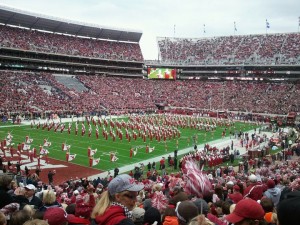 As a kid I remember watching football on rivalry weekend. Mississippi’s big rivalry is the Egg Bowl where Mississippi State faces Ole Miss for the battle of the golden egg trophy. My father went to State and I have cheered for them as a little pup. My memories as a kid in Mississippi recall there being only one rivalry bigger than the Egg Bowl. That being the neighboring state’s rivalry, the Iron Bowl. I didn’t know how big the Iron Bowl truly was until I lived in Alabama.

I didn’t really ever have a favorite team in the Iron Bowl as a kid. I remember hating Alabama because they always beat up on the Bulldogs. Auburn was another cow college like Mississippi State and they had Bo Jackson. When I was a young teen the only Mississippi school that could beat Alabama or Auburn was Southern Miss led by Brett Farve. So I was neutral in the Iron Bowl growing up. Some years I would pull for Auburn and some years for Bama. I never knew that I would end up living in Alabama nor could I imagine marrying an Alabama alum.

It wasn’t by chance that is was my first Iron Bowl. Chris and I have made a tradition of giving traditional gifts as anniversary presents. This year the suitable gift for an Alabama alum was tickets to the Iron Bowl. All Iron Bowls are important in the state of Alabama, but this year, the 75th Anniversary Iron Bowl, was a mega showdown between reigning BCS National Title champ Alabama and undefeated BCS hopeful Auburn, a probable Heisman for Auburn in Cam Newton and a Heisman winner for Alabama with Mark Ingram, and the simple fact that Alabama and Auburn hates one another. I guess I was lucky that my first Iron Bowl was such a big game.

Simply the spectacle of it all was amazing to watch. There is no other colors that clash more than crimson with white and orange with blue. Alabama and Auburn fans hate one another. There were 200 extra security guards hired just for this event. Lebron James returning to Cleveland doesn’t even compare. The pregame experience is epic where some 100,000 fans cry at the crackly audio of Bear Bryant. It is a little tacky, however, when Bama fans cheer “Roll Tide” after the team’s first down like a tent revival congregation shouting “Amen.” I haven’t even been to another Iron Bowl or even a SEC game at Auburn’s Jordan-Hare to compare the Bryant-Denny experience. But from the eagle flying and hospitality at Auburn I suggest a visit to Auburn’s version of the Iron Bowl. But my husband won’t take me to “that (damn) cow college at the other side of the state.” Yet another example of how all Bama fans refers back to “the Bear.”

I think of all the great football, baseball, and other sporting events I have been to in my life. This Iron Bowl will have to rank up there with the top events. Some people have a bucket list with various things they want to do before they die. I have a sports bucket list and going to an Iron Bowl is on it. I was able to see a game at Yankee Stadium before they closed it. Last year, I visited the frozen tundra of Lambeau Field. I have been to NFL and NBA playoff games and several motor sports events, including the Indy 500. Some of my favorite sporting events have been in Starkville, Mississippi or in a baseball park. And I am here to say, if you love college football you should try to see an Iron Bowl in your lifetime.

This entry was posted in Adventures and tagged Alabama, Auburn, Football, Iron Bowl. Bookmark the permalink.