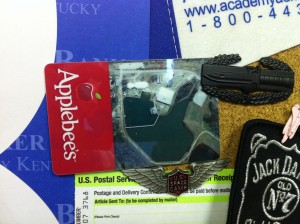 Looking at my cork board I see lots of really great memories. But there is only one that has multiple memories attached to it. One thing most of the stuff on the board has in common with each other is that it was given to me by one single person with one single memory associated with the item.  The Applebee’s gift card is different in that respect.

I received this $30 gift card from the 2009 Mach III 12 Day group. We had a cook out under the bubble at Aviation Challenge the night after S.E.R.E. (no, not the real S.E.R.E. but the puny AC version).  It was a perfect night. The kids were tired, but reveling in their accomplishments. Chops and a few other campers pulled me aside to present me with a gift card to Applebee’s. The real cool thing about this gift card is it is an aerial view of Aviation Challenge, the greatest place on earth! Chops thanked me and the other staff for “bringing back 12 Day!” Really though, the kids brought back 12 day camps.

The second memory attached to the gift card is the night the AC gang converged upon Applebee’s in Madison, Alabama. We sat around telling stores and laughing. If I remember, it was Biscuit, Divot, Slip Knot, Snapper, and Tank. It was the whole gang, but a few others. It was really nice. It wasn’t often that we all got together. But we did that night. And we enjoy a little something from Applebee’s on the 2009 12 Day kids.

The greatest aspect about the card is that Aviation Challenge is forever honored in plastic because Applebee’s has a design your own gift card program! What a great concept! This gift card screams, PRIDE, PROFESSIONALISM, and LEADERSHIP! Thank you Aviation Challenge campers and staff for wonderful memories.

This entry was posted in Cork Board and tagged Applebee's, Aviation Challenge, Friends, Space Camp. Bookmark the permalink.