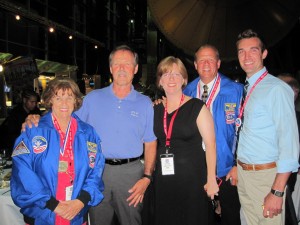 On Friday night, Space Camp held its fourth annual Space Camp Hall of Fame celebration to induct four new members into the HOF family. After months of preparation, and in my opinion with three previous HOF events as practice, we had the best ever HOF event. While it took us a few years to get the full vision of the event worked out; sometimes it takes a little time to get the recipe right. If I can continue with the cooking analogy, the HOF Executive Chef was Mike Flachbart, he was the sole reason the event was such a success.

I arrived at work just after six o’clock. It was like Christmas morning, I could not sleep the night before and I was just ready for the biggest event ever for Space Camp. Not the largest for the USSRC or the largest in number of attendees for Space Camp, but Space Camp Hall of Fame 2010 was years in the making. It had finally arrived and was a mix of huge wedding and giant family reunion. Even the previous day was filled with buzz and anticipation as guests and friends arrived in Huntsville.  These feelings carried on to Friday morning.

Friday morning at graduation we had special guests Don Thomas and Dottie Metcalf-Lindenberger. Dottie is Space Camp’s first astronaut, a teacher and a really nice person. She graduated from Space Academy in April of 1990 and twenty years later flew onboard STS 131 in April of 2010. On STS 131 she carried with her two pair of camp wings. I was greatly honored to be there when they were presented back to Space Camp. Helping get the wings into space has been one of my proudest endeavors as a Space Camp staffer. I was shocked that she took photos of the wings while on the ISS. It was very kind of Dottie to fly the wings and even more thoughtful to take pictures of them on orbit. 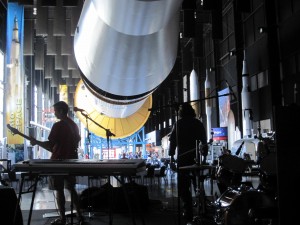 The inductees this year were Francis French, David Hnyda, Andrea Hanson, and Danny Jaques. Each inductee is very accomplished in their field and has made Space Camp very proud. Francis was a camper and now is the director of the San Diego Air & Space Museum. David Hnyda and Andrea Hanson were both Space Camp counselors. David is currently at the U.S. Naval Test Pilot School in Maryland. Andrea is a post-doctoral research scientist and engineer continuing her passion of Space Life Sciences. Danny Jaques is a middle school teacher in Colorado and has shared the dream of Space Camp by bringing dozens of his students to camp each spring.

There to help celebrate these worthy inductees where a large number of other Space Camp Hall of Famers. Staff, community leaders, friends, and families were in attendance. Also there was Max Q, the all astronaut band. Having Max Q there was an accomplishment that was two years in the making. We asked the band several times but schedules and shuttle launches prevented the group from attending. Sitting in with the band was one of the founding members, Hoot Gibson. Hoot is definitely a friend to Space Camp. And if you didn’t see the Weather Channel on Friday morning, Stephanie Abrams was at camp doing the weather and to be emcee of the Hall of Fame event. 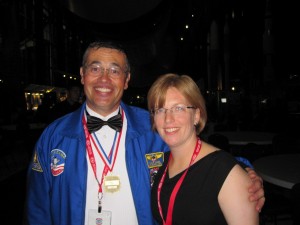 Needless to say, it was an amazing night. But amazing nights require hard work and preparation. I think the best part of the preparation was during the sound check for Max Q. A dozen counselors were setting up tables and center pieces under the mighty Saturn V as a band played in the background. It wasn’t just any band.  It was the all astronaut band. Moments like that, I realize how truly lucky I am to work at such an awesome place. Honestly, I felt that way most all of Friday.

So looking back at it all and reflecting on an amazing day. I am so proud to be a part of Space Camp! I love the place. It is a camp and educational facility where kids gain self confidence as they learn what it takes to explore the world of space and aviation. Don Thomas talked at graduation about the sign above the doors at Space Camp – Through these doors enter the next generation of Astronauts, Scientists, and Engineers. But it really wasn’t completely true until Dottie visited the ISS this spring. The dream of von Braun is still alive and well in Huntsville, Alabama. Not even a dull politician can extinguish that flame. I am just thankful to be part of this great place… even if I am mean! Thanks Danny!