Note: Please understand that the images depicted in this blog of redneck Alabama fans are only of those who are on the outer fringe, over the top, houndstooth clad, bandwagon followers; not the truly dedicated, highly intelligent fan base who visited with me at the Barn today. Please read this for the humor we all saw today! The point I am trying to make is this isn’t all Alabama fans, heck I married an Alabama Alumnus! 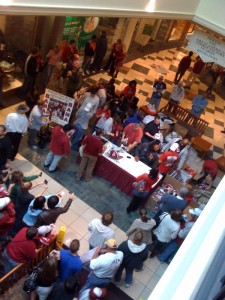 Today, while I was at the Barn, there was definitely more craziness out in the pasture than inside the corral. Walking through the parking lot I saw dozens and dozens of Crimson Tide fans. They were making their way into the mall to stand in line for an autograph by Mount Cody! For those who don’t live in Alabama or don’t know anything about college football in the south, Mount Cody’s real name is Terrence Cody, number 62 on the BCS Title winning University of Alabama at Tuscaloosa football team.  He helped the Tide beat Lame Kiffin’s Vols in October to keep his team undefeated.

So he was there signing autographs. I have never felt like I worked in a real Barn until today. Other than the county fair, I didn’t know there could be more mullets, rat tails, and bearded women in one location. I have waited in line at a Jack Daniel’s bottle signings for a few hours in my time. The difference is I get to met people from all over the United States. Today, it was really just a family reunion. Most everyone there were cousins! Ok, maybe that is an exaggeration, because there were a few baby strollers in the crowd. To my knowledge Alabama hasn’t legalized marrying your cousin just yet.

The first person in line arrived at three in the morning. He was there with iPod and his encyclopedia of Alabama football lore. He had plenty to keep him busy. When I arrived at 11:30 am, the line stretched to the escalators near Belk’s. When I went on break at 2:30 pm, the line was at the Cookie Company near Dillard’s. The line went from the escalator at Dillard’s to Belk’s wrapping around to the DMV and then back to Dillard’s and down that hallway.  At three o’clock in the afternoon they cut the line in half by telling everyone who hadn’t made it to Gymboree to go home – bye-bye, go home! When I left the Barn at 7 pm the last person in line had been waiting since 2:15 pm. She just so happened to be one of my favorite Christmas shoppers at the Barn!

Wow, all of this for a college football player. A senior consumer science major who blocked two field goal attempts against Tennessee. Not Mark Ingram, the Heisman trophy winner. Not the Pope or even the President of the United States of America. All these fanatical Alabama fans were standing in line for six to eight hours for Mount Cody to write his name on a photo, helmet, or football. Heck, he probably wrote more today than he has ever taken notes in class. He is just a guy, not the Lord All Mighty. True the crowd didn’t number five thousand and Sbarro’s was still open, so we didn’t need a miracle. However, he couldn’t perform one even if we did need some food. It was just a crazy day at the mall!

To top all the craziness on the outside we had all our favorite loons visit inside the Barn! Cameron Drape had to pay a visit to purchase things that she will return next Thursday. I don’t care how much she loves the bird plates. Once she gets those precious birds home she will want to visit us again. Cameron’s crazy red-headed kindred spirit walked in proclaiming she “wasn’t one of those D*&% Alabama Fans” I knew this would be an eventful transaction. She wanted something like vase fillers, but not fruit or candles. She wanted something that she wouldn’t knock over. I was left to think she was a blousy drunk; someone that Josh Groban would like. If you don’t get that comment, please start watching Glee, Golden Globe winning Glee. She didn’t want to give me her address, because she lives in a cardboard box.

To top it all off my table cloth lady finally returned! Well she didn’t, but her really confused husband with her receipt and minus the debit card stood steadfast cursing all Alabama fans and proclaiming War D&^% Eagle! It was a calamity! He wanted to return the table cloth that I had sold in early December after an hour of deliberation. Is it too large, it is the correct color, or will my daughter like this table cloth? Magnolia Garland was helping Mr. Auburn. He didn’t really comprehend what we were saying. He felt that we wanted to just say no to his return. This blog has gone too long, but trust me when I say it was a wild day inside and outside of the Barn.

I was thankful to work today and enjoy the carnival like atmosphere with my Barnyard friends! Manhattan, Magnolia, and all the others! The fun of working the Barn is 1 part customers, 1 part product and 1,000 parts associates! Manhattan said it best when we all had headaches from the ruckus outside, we had seen someone try to sell his place in line for $70, and all of our most special guests visited. “I am glad I could share this day with you!” This is true; if Hudson had been working we would have had to call HEMSI after his brain hemorrhaged. God bless the Barn!

This entry was posted in Barn and tagged Barn, Football, Huntsville, University of Alabama. Bookmark the permalink.