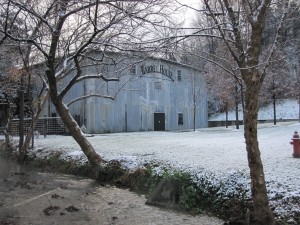 Last weekend I made a pilgrimage to Lynchburg in a driving snow storm! It was treacherous making our way to Tennessee through the blizzard. I didn’t even have bread or milk in the 4Runner with me. Those are the most valuable staples in a southern snow storm. Honestly, it wasn’t as bad as it sounds, but it was a gorgeous drive. We headed north early to make it to the bottle signing at JD so we could make it back to watch the SEC Championship and then to the Sprocket Christmas party.

Last year Divot, Tank and I made the trek up in the freezing cold to our first bottle signing. Little did I know that Divot and I would make our faithful commitment to visit Jack on a somewhat regular basis and go to all the bottle signings until we were Squires. Last year, just like this year was the day of the SEC Championship game. Unfortunately, this year Divot had to work. This year it was Chris, Gina, Ryan, and me standing in line for what seemed like a frozen eternity, but it was fun as we made friends with the crazy people around us. 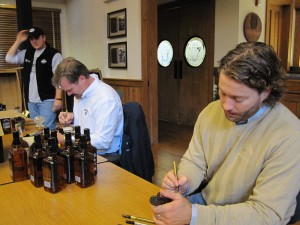 I am always amazed at how many crazy people show up and wait in line for the Master Distiller and Master Taster to sign bottles. There was someone from Alaska and several people from outside of the good ole deep south! It was cold, but it was a great day to make new friends and see old friends. The Master Distiller is an Alabama alumni and it would be a day for Alabama. I think my husband calls it “The“ University of Alabama.

Later in the day when Nick Saban chose to receive the ball after the SEC coin toss we all knew the game was on! Alabama dethroned Tim Tebow and the Florida Gators as the number one SEC team and the number one team in the nation. I am neither a Gator nor Alabama fan but I love good football! It is time for Tim Tebow to head for the NFL. I am excited for my husband in the Alabama win but why are there so many bandwagon fans? The next day while working at the Barn there were hundreds of Alabama houndstooth disciples. I saw three houndstooth fedoras, 94 sweatshirts, and 158 Bama logos. There was one lady who wore a sweatshirt into the Barn that I believe was worn last during Bear’s Bama reign. 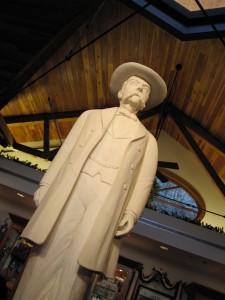 Oh well! Life is good. I saw snow on the ground in Lynchburg. Chris and I made new friends. We watched Alabama punch a ticket to Pasadena and hopefully their 13th National Title. There is no such thing as a National Championship in NCAA Division I-A football but that is another story for another day! Last weekend was wonderful and I hope everyone has a wonderful Christmas and New Year! My New Year’s resolution is not to be a bandwagon fan of any kind, visit Jack Daniels often and watch the Title game with Pumkin!