I Think I May Lose My Job! 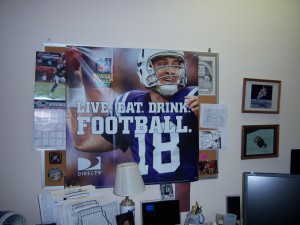 I am not sure if anyone knows this, but I dated Peyton Manning. He was my boyfriend before we tragically broke up because we never meet in real life and he got married. Yes, ever since he wore the number sixteen at the big orange college in Knoxville, I’ve loved that man. I was so happy when he was drafted number one over all by the Indianapolis Colts in 1998. I was somewhat sad that he didn’t win the Super Bowl his first year in the NFL, but the 3-13 season record would be his worst season.

In 2006, I was happy again with his first trip to the Super Bowl and his first Super Bowl win. I think I cried just a little bit when he hoisted the Vince Lombardi trophy over his head. He is on the track to be the best statistical quarterback of all time. However, Tom Brady and Bill Belichick always seem to stand in his way. Well not on Sunday night!!! Sunday night in the final quarter of play, my man, Peyton was on FIRE. Manning’s momentum, along with a stupid coaching moment, lead to a last minute touchdown to pull ahead for the 35-34 win over the Patriots!

This game was huge! A win keeps Indianapolis in the driver’s seat for the playoffs, a perfect season, and hair on my head! The week prior to the game my boss and my boss’ boss traded taunts. Marcia is a Mississippi girl just like me and she loves everything Mississippi, Peyton, Eli, Brett, and I am sure Walter and Steve during their time in the NFL. Mike is Marcia’s boss and he was born in Marblehead, Massachusetts – birth place of Joseph Dixon, father of the best pencil ever!!! Ok, I got distracted by the power of the Dixon Ticonderoga. Mike is the biggest New England Patriot fan I know. If you were to walk into his office you would know two definitive facts. He loves the U.S. space program and the Pats. 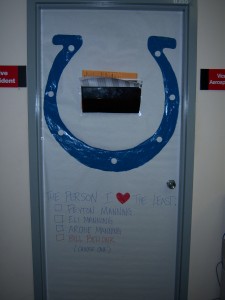 In 2007, Eli Manning robbed Mike’s beloved Patriots of a perfect season along with a Super Bowl ring. After that joyous occasion Marcia and I pulled what we thought was the perfect prank. Mike has a Space Camp flight jacket with velcro for a name badge of choice. Marcia and I swapped his badge for an Eli Manning – Super Bowl MVP name badge. For weeks he didn’t wear his jacket, selecting to support his Patriots even in a loss to the Giants. Finally on the day of simulator certifications, Mike wore the jacket to the blessed event. All the staff congratulated him on the big win by the New York Giants. They asked about being a fan of Eli Manning. The whole time I was scared of losing my job.

After Peyton’s most recent victory Marcia wanted to top our last Manning triumph. The two of us worked like little elves after Snapper finished painting a giant Colts horseshoe on Mike’s door. We covered every Patriots logo in his office. I will let the photos do the talking, but it was fun!!!

Mike answered originally with Bill Belichick, sighting the fourth down call. But after a good nights rest and contemplation over the other choices. He selected Archie Manning stating that Archie is the “Root of the Evil!” I disagree, but I like the way he things!