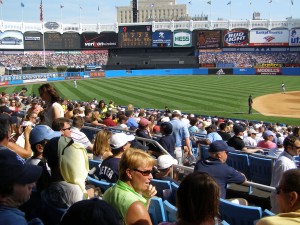 From great college games to family vacations to big league parks, I have had some seen great moments in baseball. I have listened intently to ballgames on the radio, watched records be broken from my college dorm room, and visited historic ball parks. Without a doubt I love baseball. I know most all the lines to all of Kevin Costner’s baseball movies and cry when watching the Pride of the Yankees.

Baseball is just in my blood. It has been since my parents took me to see Pete Rose return to Cincinnati to face Johnny Bench and the Reds. I was four and counted every pitch and watched every play. Since then, I have visited Wrigley Field, saw Noland Ryan pitch, and went to a playoff game in Atlanta. I was lucky to have parents that enjoyed the finer things in life such as cold beer and a hot dog at a ball game. We visited many stadiums growing up, but there was one I didn’t visit as a kid.

Since I was old enough to know who Babe Ruth was I wanted to go to New York to visit his house. Last year during the second to last weekend of the regular season Chris and I made our trip to Yankee Stadium. It was a quick trip between the second and the third week of Be Ready Camp to see the Yanks play the Rays. The Rays were the hottest team in baseball and headed to the playoffs while, the Yankees were headed into the off-season.

Chris and I drove straight from Be Ready Camp graduation to the Courtyard in midtown Manhattan. The next morning we took the 4-train to Yankee Stadium. We visited shops and toured around the area. The gates opened and we scurried through the tight maze to see the field. There are only a few things in life more exhilarating than the moment you reach the top of a stadium ramp to the opening of the bleachers where you can see the turf! The bright blue sky and the green plush grass are a bone tingling sight! Only thing that compares visually would be a grandiose view from one of our majestic National Parks (or perhaps one of the Be Ready firefighters).

We watched batting practice in the warm sun and hung out with grumpy New Yorkers, sadly some stereotypes are proven by the worst of every group; however, everyone we met was friendly and kind! There was one lady that cheered War Eagle our way when she saw Chris’ Alabama ball cap [Editor’s note: Roll Tide]. After finding our seats we made friends with everyone around us. We were those fans, the ones that sat in other people’s seats until the shade covered our seats. I am a redhead. I didn’t want to burn. We went inside for Yuengling and dogs. We didn’t want to drink the light beer that was being peddled in the stands. 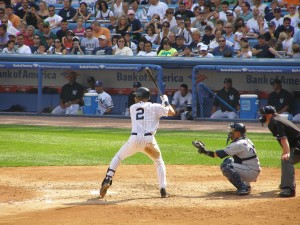 The game itself was awesome. I had dreamed of going to a Yankees game for years. I think Derek Jeter knew this fact and went 3 for 4 with a home run. He also tied Lou Gehrig’s Yankee all time hits record. ARod also gave us a little show. In the first inning he hit a grand slam which put everyone on their feet. The crowd was electric. And just because I was in town, they put Mariano Rivera in for one out! It was the perfect day. [Box Score]

This fall as the anniversary of our trip neared I wanted to go back. But sadly I think the new stadium is not as enchanting. There was something magical knowing that I was sitting in the same ball park Babe Ruth, Lou Gehrig, Joe DiMaggio, Mickey Mantle, and a host of other greats played. Not only did Yankee Stadium play host to baseball and football teams, but it was the site of concerts and Pope visits. If the bricks and mortar of that great stadium could talk they would tell an epic tale of America’s pastime. 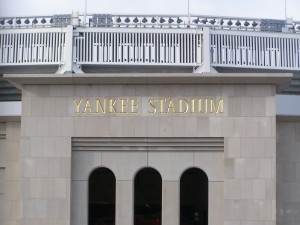 This year the Yankees are headed to the playoffs. There will be no farewell speeches at the last game. The new park has lots of glitz and glamour. I will cheer for them just as I always have, but I am sure the new park will not have the same magic. I only visited one day last year. But I feel like I had a little bit of the Yankee magic rub off on me. Now I carry that with me where ever I go.