Who is Elmer T. Lee?

First off… Happy Birthday Walt!!! You are the greatest big brother ever! I am looking forward to hanging out with you this fall at the Egg Bowl, deer hunting, and the holidays!

Secondly, my goal for today was to hit Maker’s Mark and Woodford Reserve along the Bourbon Trail. The day started with confusion. I didn’t know what time zone I was in. Eastern or Central, it really didn’t matter, I was lost. I didn’t want to be late so I decided to figure out were I was in the space time continuum on the road. It didn’t take me long to drive from Bardstown to Loretto.

I arrived at Maker’s Mark two hours before the first tour. I walked around the grounds snapping photo’s and then looked at the clock. I called someone at work to pass the next forty-five minutes. First up on the speed dial was the Yankee Girl. We chatted about everything from my broken tub to a Southern Living article on the Bourbon Trail. Based on the article she told me to look up Capital Cellars in Frankfort. And I needed to try to find Elmer T. Lee or Pappy Van Winkle bourbon. 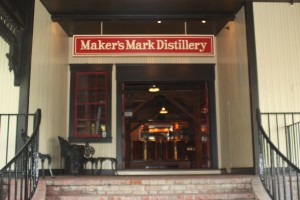 Ten o’clock rolled around and everything opened up at Maker’s Mark. I loved visiting this distillery. It was what I expected. I saw the still, the print shop, the bottling line, and the gift shop. Note of interest, you can dip you own bottle at the gift shop. If you are not familiar with the history of Maker’s Mark it is a story of rebellion. Bill Samuels Sr. sold his father’s bourbon label and burned his family’s 170 year old recipe. Bill Sr. was the sixth Samuel to make whiskey in Kentucky. He started from scratch making bourbon he liked. He went with no rye and replaced it with winter wheat and barley.

Bill Sr. and his wife, Margie, shook up the bourbon world. When they got into the business in the 1950’s women didn’t participate in the trade. Bill Sr. would be responsible for what was inside the bottle and Margie would be responsible for what was on the outside of the bottle. She gave the whiskey its name, perfected the red wax, and created the drink’s trade mark. Seeing the bottling line where every bottle is hand dipped was a true highlight of the day.

When I left the parking lot at Maker’s Mark I kind of got lost. I found myself on a single car rode. I felt like I shouldn’t be on the road. It was like this road was build for someone in particular and I am not that person. I wanted to keep moving forward so I asked the iPhone to help me out. I didn’t have service. Astonishing while I was lost in Nowhereville, Kentucky with no cell service I got a text message from Snapper. So text messaging knew where I was but I didn’t. I did find Versailles and drove by Kim Dickerson’s old school. I stopped in the office of Woodford High School to sign a petition to change the name to Dickerson High. 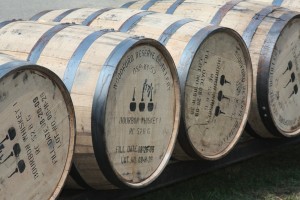 Woodford Reserve’s tour was worth the five dollars I paid for it. Woodford Reserve traces its roots back to 1797 when Elijah Pepper starting making whiskey in the area. Woodford, just like all modern distilleries, are not owned by their founder’s family. Large companies have gobbled up all the little guys. Woodford is owned by Brown-Forman. We like Brown-Forman. They also own Jack Daniels. Woodford (at the time Labrot & Graham Distillery) was purchased by Brown-Forman around the same time the company acquired Jack Daniels. They would shut down the distillery until 1968 and then sold the property in 1971. In 1994, Brown-Forman was in the market to by a small distillery with a lot of history and they rediscovered their old facility.

Woodford is considered a small batch bourbon whiskey. What is a small batch? They make a well crafted product but not much of it. Compare Woodford’s production of around 125 barrels per week to Jack Daniels’ daily production of more than 2,000. WOW! Here is another fact. Woodford Reserve is the only bourbon to be distilled using three cooper pot stills. Being Brown-Forman’s small batch brand, using a unique way of distilling, and being closely associated with the Kentucky Derby and Breeders Cup, I would consider Woodford Reserved to be Jack’s rich cousin.

Finishing up in Versailles I drove to Frankfort to look for the Capital Cellar. I was successful and it was just as charming as I envisioned it would be. I was warmly welcomed by one of the associates. She offered me some wine to taste and I couldn’t turn her down. I had a “naked” chardonnay. That means it was not aged in oak barrels but in stainless steel. It was great, very fruity and fresh, crisp and bright.

I also looked for Pappy Van Winkle and Elmer T. Lee. Found both, Pappy was as expensive as Johnny Walker… VETO! Elmer T. Lee was much more reasonable. I picked it up along with two bottles of wine for gifts. The British gentleman behind the cash register told me that Elmer T. Lee was still a live and well. The man also shared with me that Lee frequents their establishment. He is Buffalo Trace’s Master Distiller Emeritus and he rejects just as many barrels as his accepts for his label of bourbon. I am glad I picked up the bottle, because that was a neat story.

So far on my adventure I have learned lot of new facts and traveled many back roads. Some roads were too far back! I have ventured into a cave and hand dipped a bottle of Maker’s Mark. I have visited distilleries in full operation and some that were shut down for a few weeks. I also got to see an original still from Jack Daniels. I don’t know if it was original to Jack Daniel himself or if it was a post prohibition still, but still very cool. Most of all I have remembered how much of a nerd I am. I love learning. I love all the little details and facts behind the cave and the bourbon. I am looking forward to coming home, but I look forward to coming back this way shortly.

This entry was posted in Adventures and tagged Kentucky, Maker's Mark, Woodford Reserve. Bookmark the permalink.