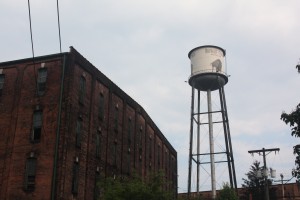 This morning I visited Buffalo Trace Distillery in Frankfort. If you are not familiar with the name, give them a few years as they have only been producing bourbon under that name since 1999. Before then it was known by George T. Stagg Distillery and the O.F.C. Distillery. Historical record shows that distilling started at that location sometime before 1773. The first commercial distillery and permanent structure was built in 1812 by a Mr. Blanton. During prohibition this distillery was allowed to continue production for medicinal purposes, yeah right. Just like all the other brands of bourbon it was purchased, sold, or changed hands many times. Currently, it is owned by a New Orleans company (isn’t that where all bourbon goes anyway) named Sazerac.

That is a lot of boring facts, sorry. But Buffalo Trace is not a brand or distillery that I knew a lot about. From its history that I learned on the tour I should have known something about this company. It is a large distillery with a great history. It is very industrial in nature. So industrial you think anything could be made or produced at Buffalo Trace. And it kind of is, today they were fermenting sweet mash for vodka. But yes, it is known for its bourbon first and foremost.

Maker’s Mark and Woodford reserve were pretty distilleries found off the beaten path. Buffalo Trace just by the nature of its names is not such a distillery. The name Buffalo Trace is given to the trails and ruts the buffalo used to cross the Kentucky terrain making their way to the plains. Settlers used the buffalo’s trail to find their way into American’s frontier. Bourbon is America’s spirit. I bet you didn’t know we had a spirit. If you look at the history of Kentucky and the survival of commerce, bourbon is a major player.

The neat thing about bourbon is once it comes off the still it is crystal clear. It tastes awful. They call the clear spirit white dog. The white dog goes into a new American oak barrel. Over the next four to twenty-six years it experiences the seasons in a barrel house. The clear liquid ages and matures based on the dark, dank world of a warehouse. When the spirit has finished its adventure it is dark, rich, and flavorful. All the way its care taker is the Master Distiller. He may be the care taker, but the spirit is entrusted to the barrel and a barrel is only as good as the oak stand it was harvested from. Every little detail of whiskey production can play a role or factor. Similar to the aging and maturing process we all go through.

We all come in to this world ready to learn and grow. Some of us are placed into strong enriching families where we grow and gain “flavor.” Some of us are placed in other areas of the barrel house and later will be blended with other barrels to make a fine bottle of whiskey. But we all gain wisdom, color, and character through our own aging and maturing process just like bourbon whiskey experiences during its life. The adventure in life for humans is just like whiskeys adventure. We are influenced by the people we are surrounded with. Our barrel is our friends and family. Whether you are the spirit or the oak, soak up the experience of life.

One last distillery to visit… On my trip home I stopped by Jack Daniels. I had to visit Jack. I felt like I had been cheating on him this week. It was raining cats and dogs. But I had to pick up a bottle or two for tomorrow’s signing. I saw Angie, my favorite tour guide. I spoke to her briefly. The Bourbon Trail was great, I learned a lot, but I am still loyal to Old No. 7. If you ever get a chance to tour the distilleries along the Bourbon Trail, please do. You will learn a lot about yourself and your country! Experience life, don’t stay white dog forever!